Reverse osmosis technology is the most advanced and energy-saving membrane separation technology. Compared with the traditional distillation technology, it saves more energy consumption and has high water production efficiency. In recent years, with the development of society and the increasing improvement of people’s living standards, the application fields of reverse osmosis systems are becoming more and more extensive. For example, reverse osmosis is used to convert seawater and brackish water into drinking water, treat medical wastewater and generate medical water, treat oilfield water and industrial wastewater, etc. Therefore, the reverse osmosis system has become an indispensable part of human water treatment.

Reverse osmosis systems can not only save water and environmental protection but also produce high-quality and stable water, which has high-cost performance and commercial value. In order to have a more systematic and comprehensive understanding of reverse osmosis, NEWater will introduce the nine advantages of reverse osmosis from five aspects.

2.0 The Principle of Reverse Osmosis System

Because the pore size of the reverse osmosis membrane is very small (only about 10A), it can effectively remove dissolved salts, colloids, microorganisms, and organic matter in water (the removal rate is as high as 97986). The system has the advantages of good water quality, low energy consumption, no pollution, simple process, and simple operation. 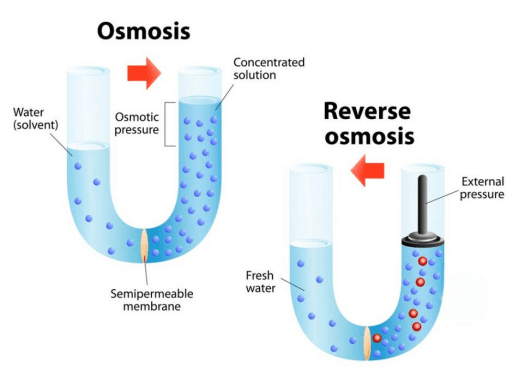 Reverse osmosis device has its specific requirements for water pretreatment. On the one hand, the suspended solids and colloidal impurities need to be removed in the raw water; on the other hand, chemical dosing treatment is required to prevent the deposition of some insoluble salt on the membrane due to concentration.

The main function of the pretreatment system is to remove impurities such as organic matter, suspended solids, colloid and residual chlorine in the water, so as to make the raw water meet the water inlet requirements of the reverse osmosis host system. It is mainly composed of raw water tank, raw water pump, dosing device, quartz sand filter, activated carbon filter, precision filter, etc.

Membrane performance is the key to the realization of reverse osmosis separation. Membrane performance refers to the physicochemical stability and separation permeability of membrane. According to the characteristics of groundwater, NEWater composite membrane is adopted. The membrane has the advantages of good chemical and biological stability, high desalination rate, low working pressure, low power consumption, long service life and no change in water production with service time. The desalination rate of a single membrane reaches 99.6%. 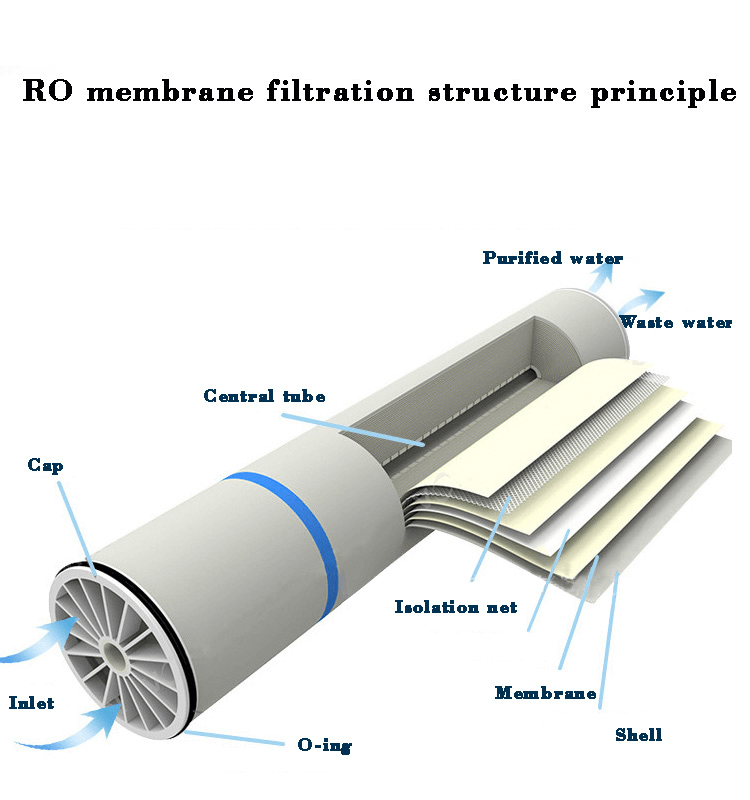 The whole system is equipped with an operation control box, which can realize the functions of automatic and manual operation of reverse osmosis system, including system shutdown, automatic flushing, and system low-pressure protection; The startup and shutdown of the whole unit can be completed locally or automatically.

Reverse osmosis water treatment technology basically belongs to physical methods. With the help of physical and chemical processes, it has many advantages that traditional water treatment methods do not have; Reverse osmosis equipment has good desalination effect and is conducive to environmental protection. It is generally used for advanced water treatment and making pure water and high-purity water systems because it is widely used in electronics, food and beverage, chemical industry, pharmaceutical, and other industries. The advantages are as follows:

As technology advances, the needs of society are being taken into account while new equipment is being developed. NEWater is committed to meeting the needs of its customers, minimizing pollution at all levels and providing high quality industrial water at low cost. NEWater uses reverse osmosis technology to treat the discharge water of the circulating cooling water system, realizing zero discharge of the circulating cooling water system. The following is the process flow of reverse osmosis treatment circulating water drainage system:

After softened and clarified by sodium carbonate, sodium hydroxide and flocculant, the hardness of the discharged water of high concentration circulating water is reduced by about 70%, the content of silica is reduced by about 60%, and the CODmn is reduced by 40% – 50%; Add hydrochloric acid to the clarified and primary filtered water for softening to reduce the pH value to 7.0-7.5, and then add bactericide for sterilization, double filter material filter, activated carbon filter and security filter, sd1<4 (generally about 3); The desalination rate of reverse osmosis system is about 95%.

There are two rows of reverse osmosis units, each with an inlet flow of 80m3/h, a water yield of 60m3/h, and a design recovery rate of 75%; The membrane modules are arranged in one level and two sections, 9/4 in each column, and anti-pollution composite membrane elements are used. The reverse osmosis produced water is sent to the chemical workshop of the power plant and used as boiler make-up water after ion exchange desalination; The surplus produced water is reused to the circulating cooling water system. The reverse osmosis concentrated water is discharged to the boiler water ash flushing system as ash flushing water. The system has achieved a good water-saving effect. 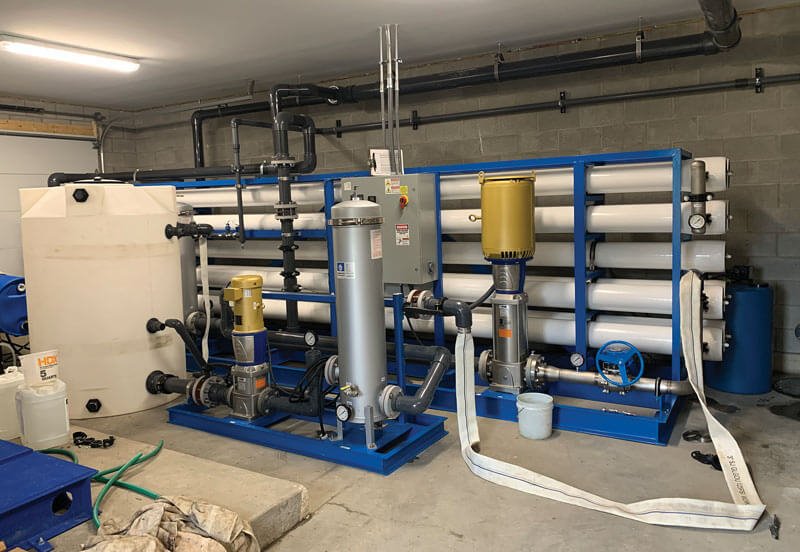 (2) Application of Ultrapure Water in Preparation of Electrophoretic Paint

In the electrophoretic paint industry, reverse osmosis ultra-pure water treatment equipment can adjust the water quality of effluent and ensure the smoothness of plated parts. The ultrapure water treatment equipment for electrophoretic paint of NEWater adopts reverse osmosis as pretreatment and it is equipped with electrodeionization (EDI) device, which is the most economical and environmental protection process for preparing ultrapure water at present. Ultrapure water can be continuously prepared without regeneration with acid and alkali, which is not destructive to the environment.

The preparation process of ultrapure water for electrophoretic paint of NEWater company is as follows:

The traditional ultrapure water treatment equipment for electrophoretic paint mainly includes multistage distillation, high-pressure fractional distillation and centrifugal purification distillation. The distillation method is carried out at a high temperature of 120℃, and completely sterile water can be obtained. Therefore, the components of the equipment must withstand the impact of high temperature, and the cost and maintenance cost of the equipment is high. Reverse osmosis technology combined with high-efficiency ozone disinfection method, the whole system works at room temperature and low pressure, with low equipment investment and low operation and maintenance cost. The operation cost of the membrane treatment method is only 12-15% of that of the distillation method, which is very economical and competitive.

The NEWater membrane process adopts a multi-media filter for pretreatment. The microporous permeable working principle of reverse osmosis membrane ensures the removal of all large ions and molecules in water, and it can easily remove volatile organic pollutants with larger molecular diameter, so as to fundamentally ensure that the organic indicators meet the indicators specified in the Pharmacopoeia.

(3) Application of in the Preparation of Pure Drinking Water 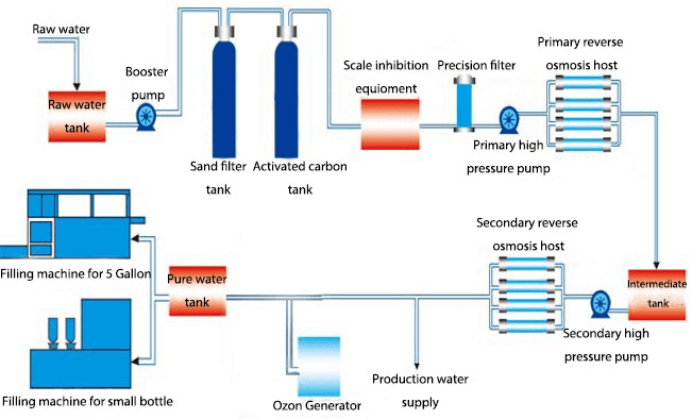 NEWater adopts two-stage reverse osmosis technology, with a higher ion removal rate than single-stage, which is suitable for industries with high requirements for pure water. Taking well water as an example, the total hardness of general well water is about 630mg/L (calculated by CaCO3), and the total amount of Ca2+ and Mg2+ is 200mg/L, mainly bicarbonate, sulfate, chloride, and nitrate, which is not suitable for direct drinking.

After performing secondary reverse osmosis treatment on the pure water from single-stage reverse osmosis, NEWater not only removes the salt in the water but also effectively removes bacteria, viruses, and some organic matter in the water. Yes, the effluent quality meets the international hygienic standard for bottled drinking pure water. 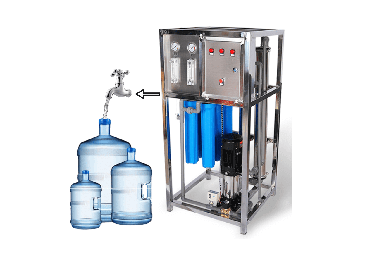 6.1 Problems In the Application of Reverse Osmosis System

The main purpose of the security filter is to ensure that the RO inlet water does not damage the membrane module. Generally, the filter aperture is 5μm. The filter element shall be replaced according to the front and rear pressure difference, and the pressure difference shall be controlled within 58.8kpa.

2. Use of Scale Inhibitor

① It can inhibit the growth of bacteria and prolong the cleaning cycle;

③ The saturation critical value (LSI value can reach 2.5) is increased. Acid can not be added to most raw water, and acid can be greatly reduced to a small part of raw water, so as to reduce CO2 in reverse osmosis effluent.

In the process of reverse osmosis water quality separation, the membrane surface contains many pollutants. Because the water separation direction is 90 ° with the water flow direction, the pollutants on the membrane surface can be removed by a large number of flushing. In fact, the cleaning device is ignored by the original domestic assembly equipment, and the inlet equipment is equipped with a cleaning device. NEWater has developed a PLC automatic control large flow flushing system, which is conducive to prolonging the service life of the RO membrane.

There is a complex calculation method for the design and calculation of RO devices. At present, NEWater company has developed special software. The designers preliminarily determine the scheme according to the raw water quality report and the performance of each membrane element, then input the raw water quality into the computer, and the program software will verify the feasibility of the preliminary scheme. If it is abnormal, a warning will be issued and the unreasonable part of the design will be displayed.

Don’t hesitate to contact NEWater now. We will provide strong technical and equipment support and water treatment solutions. Feel the new water brought by the reverse osmosis system, and change the fate of water with science and technology!