In addition to the energy-saving technology of recovering the residual pressure energy of reverse osmosis concentrated water, the use of solar energy to reduce power consumption also has the advantages of energy saving and environmental protection and has a wide application prospect.

The solar-driven membrane distillation system is used for seawater desalination or coupled with reverse osmosis to improve the freshwater recovery rate of seawater desalination, which is energy-saving and environment-friendly, in line with the international direction of energy conservation, emission reduction, and carbon dioxide emission reduction. It is very suitable for islands or islands with insufficient power supply systems.

Solar energy is inexhaustible green energy. In essence, it is the conversion of light energy into electric energy. It is a high-tech means to make objects emit electrons to generate current under the irradiation of sunlight according to the principle of the photovoltaic effect of some objects. The normal solar heat collection system can reach the temperature required for membrane distillation operation.

After about half of the water resources are input through reverse osmosis desalination, the remaining salt will not enrich and block the reverse osmosis membrane. Combined with solar energy to provide power for the water pump, the brine with twice the salt content of seawater can be desalinated. 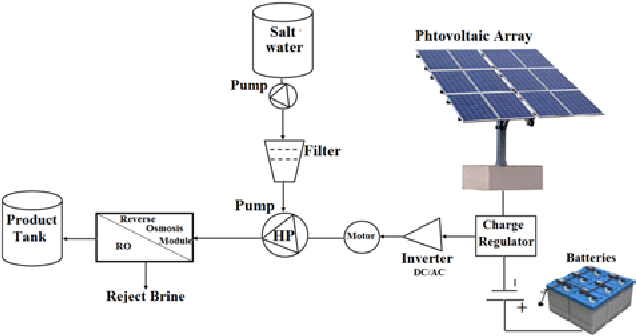 The principle is that there is a porous plastic film in its seawater desalination system, which can let water vapor pass through and block other substances at the same time. One side of the film is covered with tiny carbon particles, which can absorb the heat of sunlight and make the saltwater in contact with it easier to evaporate. After passing through the film, the water vapor will condense into fresh water on the other side.

Moreover, the plastic lens is introduced into the film, which makes the sunlight gather better and generates more heat, which improves the efficiency of the system by 50%.

Membrane distillation is a new distillation or separation technology combined with the membrane method and thermal method. It has the characteristics of high water quality, compact structure, modular design, low water inlet requirements than reverse osmosis, low operating temperature (50-80℃), can be driven by new solar energy, and is resistant to the corrosion and oxidation of chloride ions, free chlorine, and other substances.

Although the electric energy converted from solar energy through photovoltaic panels can also drive the reverse osmosis system, the photoelectric conversion rate of photovoltaic panels is only 17% to 25%, and the photothermal conversion rate of heat collectors can reach more than 80%. Therefore, the solar-driven membrane distillation seawater desalination system has more economy in operation cost and bright prospects. 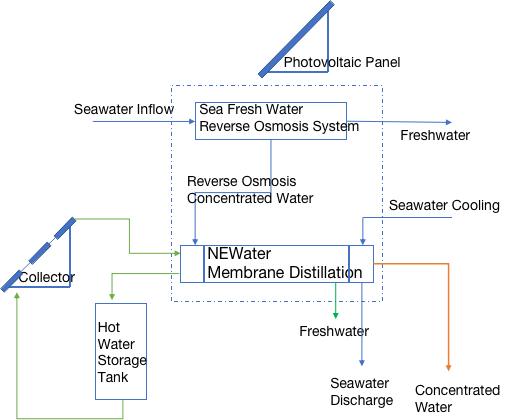 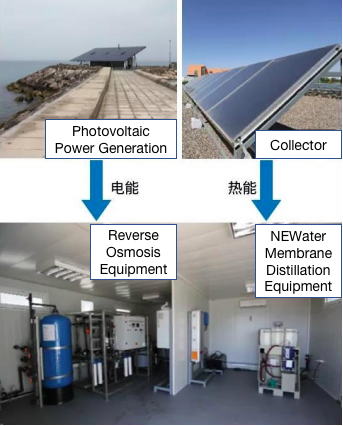 The NEWater membrane distillation equipment uses the steam generated by the solar collector to directly drive the steam turbine pump to provide the water inlet flow and pressure of the reverse osmosis module.

During the pilot test, the operation of the NEWater membrane distillation system is stable, the average flux can reach 4.5L/(M2·h), and the conductivity of produced water is less than 90μS/cm, Figure 5 shows the continuous operation data for 8 days. The pilot test results fully verify the feasibility of a NEWater solar-driven vacuum multi-effect membrane distillation system for seawater desalination or brackish water desalination in outlying islands or island areas. 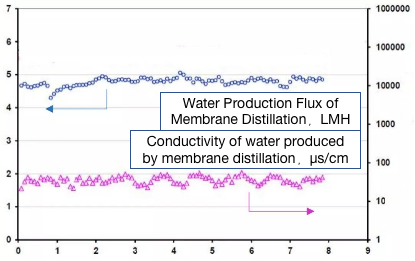 At the same time, because the working pressure of reverse osmosis equipment is related to the salinity level, the average salinity of seawater is 3.5%, the reverse osmosis pressure is high, the freshwater recovery rate is low, and the energy demand is relatively high. In addition, there is a shortage of energy in the marine working environment. There is an urgent need for an energy recovery device to solve the energy consumption problem of small-scale seawater desalination.

A small seawater desalination device is a device for treating seawater or brackish water into fresh water and drinking water. It has the advantages of a small floor area, easy preparation, and easy relocation. The new portable solar desalination device currently studied by NEWater company is a device that can convert light energy into electric energy through its own solar panel and store it in the battery. 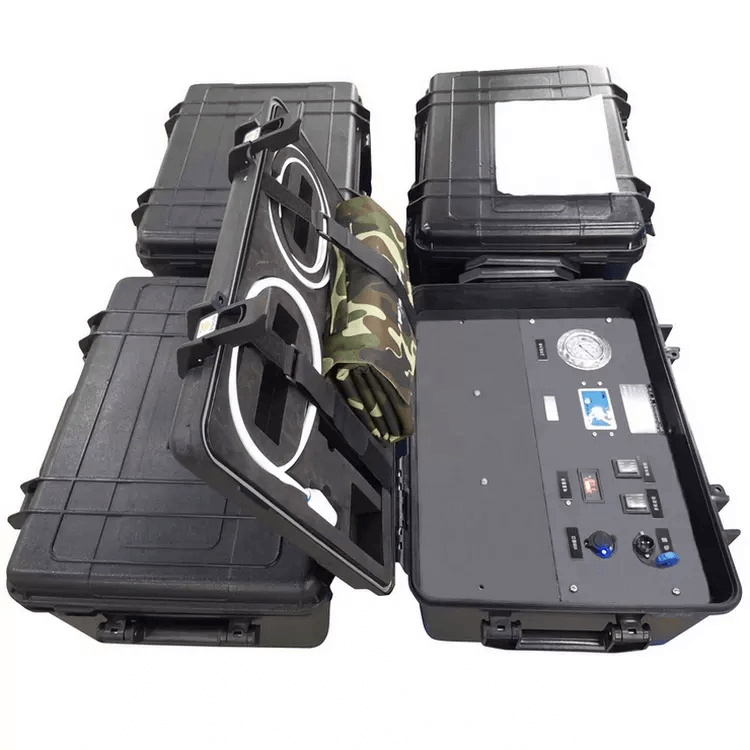 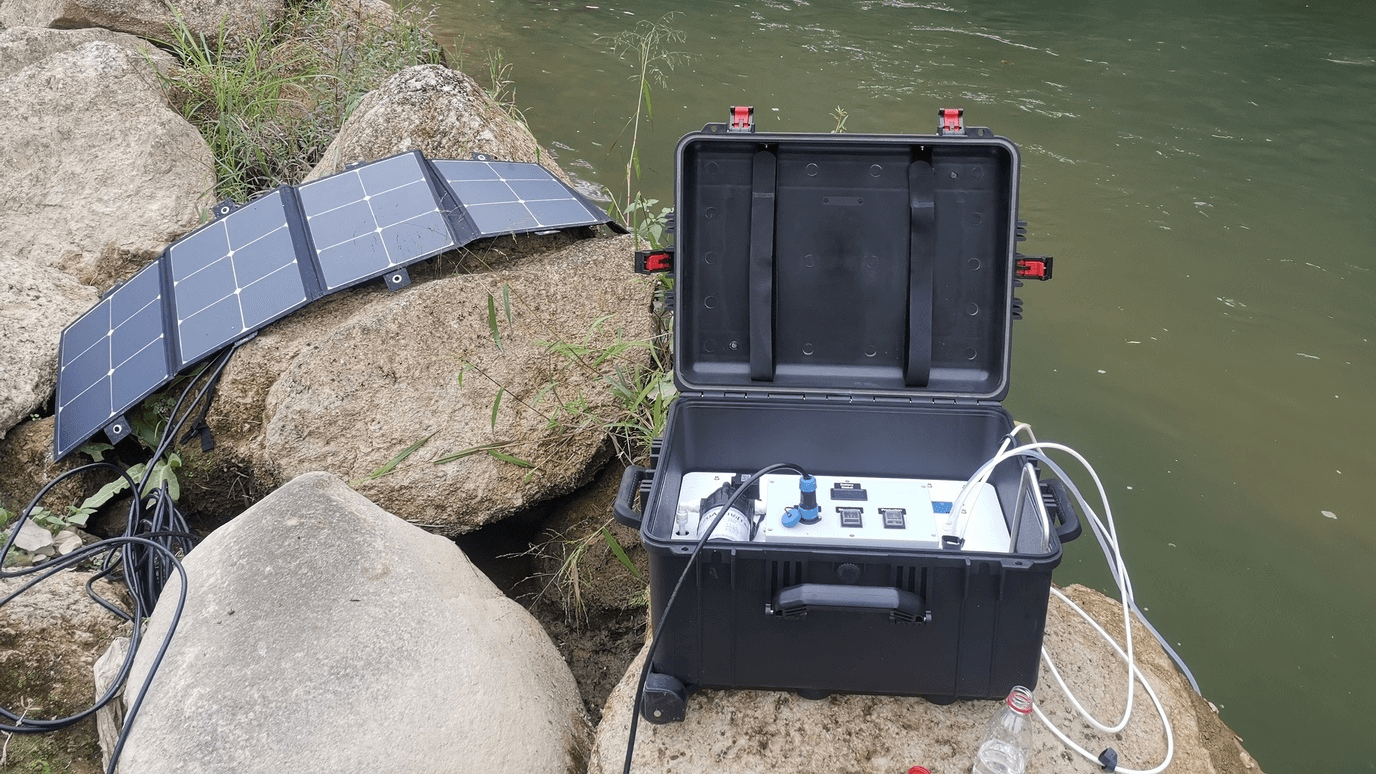 In the process, without tap water pressure, the water pump is driven by the battery power supply to suck seawater into the equipment for filtration and distillation to remove harmful substances. At the same time, it can effectively filter bacterial pathogens, so as to effectively improve people’s drinking water safety.

At present, the boiler water used in hospitals, schools, and bathing places basically adopts nonrenewable energy such as gas and coal. The whole process consumes a lot of energy, is harmful to the environment, and has a low degree of environmental protection. At the same time, the purification degree of traditional boiler water is low, and there are certain hidden dangers in water quality. If solar energy and reverse osmosis are combined and applied to the preparation of boiler water, it can not only save energy and promote environmental protection but also purify boiler water and ensure its quality of water. 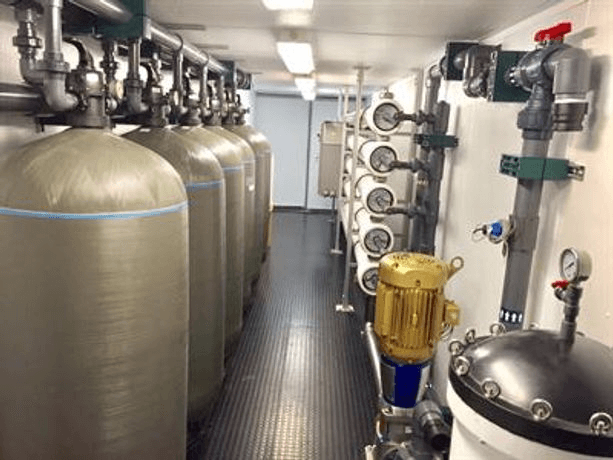 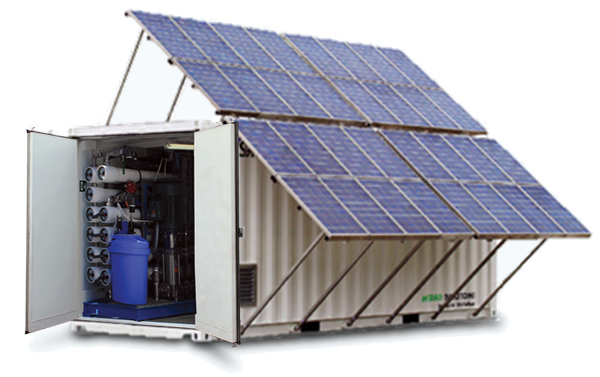 The above data show that the solar reverse osmosis boiler water equipment prepared by NEWater can greatly save energy and reduce emissions, which calls for the response of the times to environmental protection and meets the needs of people’s production.

If you have any needs or problems in the process of seawater desalination, water purifier production, boiler make-up water treatment, etc., contact NEWater directly, and our technical engineers will provide one-to-one powerful water treatment scheme and equipment support for solar applied reverse osmosis system, so as to realize energy conservation and environmental protection and create water for life with you!