Solar desalination grows more popular each day as the demand for freshwater soars higher and as significant strides are made in solar energy technologies. Over the years, the cost of desalinating saline water has reduced significantly, and this has consequently led to the extensive use of desalination equipment across the globe.

At present, it is estimated that over 300 million humans, spread out unevenly across the world, are beneficiaries of salty water desalination. Desalination is essentially a power-driven process that can be realized using renewable or non-renewable energy sources. Although non-renewable energy sources are the predominant energy providers, we are presently witnessing an increase in the use of solar desalination equipment.

Ultra-modern solar desalination systems are simple, easy to use, efficient, and environmentally friendly. They are particularly a saving grace to households, businesses, and organizations situated across off-grid coastal regions. Our article today pays special attention to solar desalination equipment and provides you with all the tips and tricks requisite for buying one. 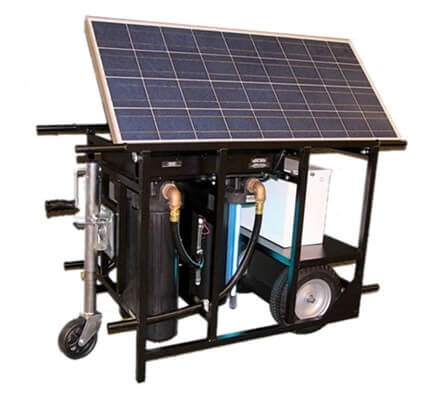 Purchasing a solar desalination system is not necessarily the easiest of tasks. Lots of factors come into play and it is paramount that you conduct extensive research and consult accredited experts. Underneath, we are going to extensively look at the different factors one should deliberate on before procuring a solar off-grid desalination unit.

1. The quality, composition, and concentration of your feed water.

Before venturing into the market to purchase a solar desalination unit, it is important to first test your feed water and get an understanding of the different impurities harbored. Desalination machines are primarily designed to convert salty water into fresh potable water. However, salty water differs in composition and concentration. To get a glimpse of your feed water’s salinity levels and its chief contaminants, you will be necessitated to undertake a sample test. Here are the different classifications of saline water based on salt concentration levels;

After comprehending the concentration and composition of your saline water, you can proceed to order a customized solar desalination system. Additionally, establishing the quality of your feed water helps you and the manufacturer understand the types of preliminary and post-treatment systems needed if any.

Solar desalination machines are often deployed in the company of complementary water filtration systems due to the presence of other objectionable impurities. To get a clear understanding of your feed water’s concentration and configuration, you are welcome to consult our technicians. 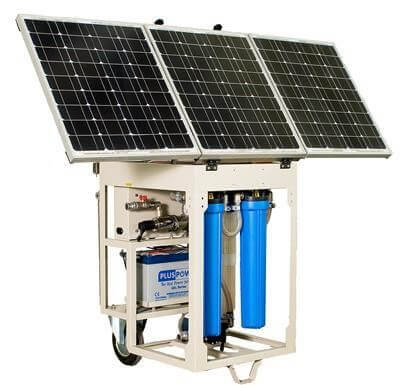 2. The quality of freshwater generated.

Different solar desalination systems extract different impurities and have distinct desalination rates. This means that the quality of potable water harvested may differ depending on the desalination equipment used and the quality of feed water used. If you are looking to generate high purity water, e.g. Type I or Type II purified water, you will be necessitated to procure a sophisticated ultra-pure water system.

If you intend to generate fresh drinking water, a simple solar-powered water maker should suit you best. The quality of water generated by a solar desalination system can be determined by measuring the permeate’s conductivity/resistivity, microbial count, pH, Total Dissolved solids (TDS), and the microbial count among others.

To ensure that your solar desalination unit generates quality potable water, complementary water filtration units (pretreatment and post-treatment filters) may be incorporated. However, modern-day solar purifiers are more efficient, eliminate a myriad of unwanted impurities, and have an impeccable desalination score. Most ultra-modern solar desalinators generated desalinated water with a maximum TDS score of 1000 parts per million (ppm). 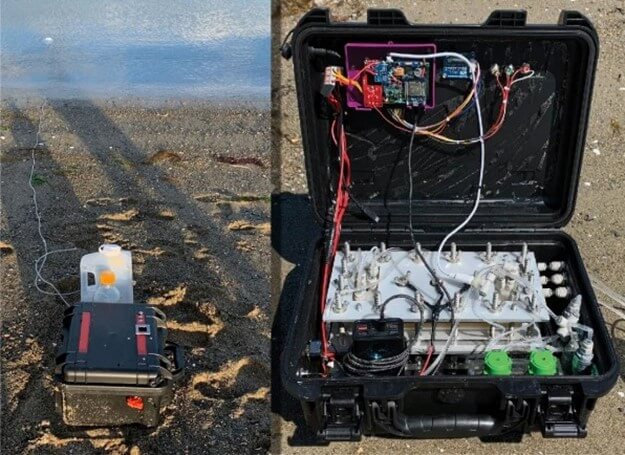 How many gallons of fresh water does the solar-powered water maker generate over a specified timeline for instance an hour or day? Due to the variation in production scales of different prospective customers, solar desalination systems are manufactured with distinct production capacities. Typically, the production capacity of water treatment systems is measured in gallons per minute (GPM).

Based on production capacities, most solar desalination equipment are classified as either;

Solar reverse osmosis (RO) unit gets rid of dissolved salts and other objectionable pollutants using partially permeable membranes. Reverse osmosis desalination is primarily power-reliant and the required power can be drawn from a renewable or non-renewable source. This technology is broadly utilized in households, businesses, industries, and institutions. It is also tremendously effective and can eliminate up to 99.7% of Total Dissolved Solids (TDS).

Thermal distillation or desalination on the other hand is a salt removal technology that is quite similar to the organic rain formation process. The saltwater is essentially boiled using a solar-powered heater or evaporator until evaporation occurs. The consequent vapor is then chilled or condensed to generate fresh water while the dissolved salts are left as a residue in the evaporator. 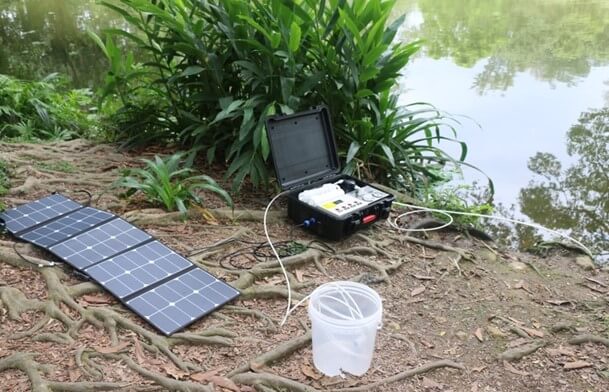 Saline water desalination is essentially a power-driven process. However, the days of astronomical power bills accrued due to desalination are long gone. Recent technological breakthroughs have significantly slashed the power consumption rate of both reverse osmosis and thermal desalination systems.

Solar desalination is particularly cheaper compared to fossil-fuel-powered desalination. This is primarily because solar energy is a free resource harvested from the sun. Ideally, the amount of energy consumed by a solar desalination machine depends on a number of factors, key amongst them being;

On the contrary, desalinating a thousand gallons of seawater using thermal distillation equipment, specifically, a multi-stage flash distiller will necessitate approximately $3.79. NEWater’s solar water cleaning systems are uniquely and impeccably designed using top-notch energy recovery technologies, which decrease their energy consumption by a factor of up to 70%.

6. The projected purchasing and operational costs.

The capital costs and subsequent operational costs of solar desalination systems have shrunk tremendously over the last three decades. This is primarily a consequence of the sophisticated yet efficient technologies constantly being innovated and improved. When you are in the market for a solar desalination device, it is paramount that you pay close attention to the price tag as well as the expected cost of operation.

Ordinarily, different solar desalination units attract different prices and incur varied operational costs. The differences in costs are chiefly attributed to the variation in construction material, the ingrained desalination technologies, the size, and the design of the equipment. Underneath are some of the costs incurred in operationalizing a solar-powered desalination unit.

On average, converting highly saline water e.g. seawater into fresh potable water costs approximately $0.79 to $2.38 per cubic meter. Converting a similar amount of brackish water into fresh water, on the other hand, costs approximately $0.29 to $0.66. We provide high-grade solar desalination machines that are energy efficient and economical at a competitive and pocket-friendly rate. 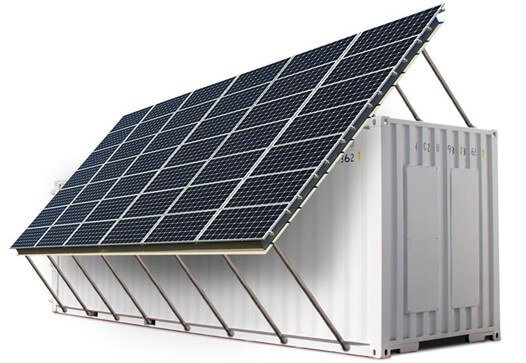 7. The intricacies of your application.

What do you need the solar desalination system for and what quality of desalinated water do you need? Most applications that generate potable water through desalination have varying demands when it comes to water quality. As such, most of them tend to necessitate varying types of water purification systems.

Having a clear understanding of the qualitative and quantitative demands of your application is highly beneficial when purchasing solar desalination equipment. Additionally, some potable water applications such as laboratories and pharmaceuticals are necessitated to use potable water of a certain grade or quality.

Presently, there are loads of distinct solar desalination devices specifically designed for certain applications. Some of the most in-demand specialized solar desalinators include;

Universally, water scarcity and poor water quality are immense problems each country continues to grapple with. Varying coping mechanisms have been adopted and solar desalination is currently bearing a lot of promise. This technology has made it possible for households, industries, and businesses with access to salty water to generate fresh potable water.

Ultra-modern solar desalination machines offer exemplary desalination rates, power efficiency, and cost-efficiency. However, finding a befitting unit for a specific application can be pretty puzzling due to the broadness of available options. NEWater provides comprehensive water treatment solutions and our solar desalination solutions are diverse, dynamic, and personalized.

Additionally, our auspicious technicians are welcoming and will gladly help you choose the perfect solar desalination equipment for your respective application. Get in touch with us today for all-inclusive, affordable, and reliable solar desalination solutions.