Fuel energy is associated with the release of humongous amounts of greenhouse gasses known for causing global warming. To combat adverse climate change, environmentalists are pushing for the substitution of fuel energy with renewable energy like solar. In recent years, the use of solar energy in water treatment has gathered momentum, especially in off-grid locations.

As of 2016, over 300 million people depended on desalinated water and it is safe to conclude that this figure has risen considerably as more regions have been hit by freshwater scarcity. Our today’s article dwells on solar-powered desalination, the distinct equipment in use, and its feasibility in off-grid applications. 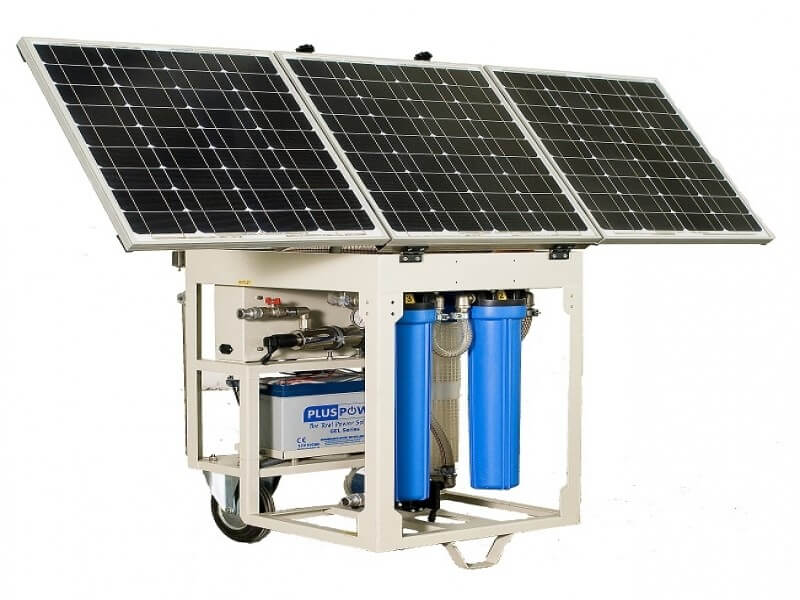 What is a Portable Solar Water Desalination System?

A portable solar water desalination system is a mobile water purification unit that converts saline water into fresh water using solar energy directly or indirectly. In the last few years, the use of solar desalination has proliferated immensely in off-grid locations as the demand for freshwater soars even higher. Modern solar desalination units are divided into two;

In the recent past, saltwater desalination has become a widely used and dependable alternative way of generating fresh water. Desalination is an illustrious process that alienates dissolved salts from saline water to make it potable. Thanks to impeccable innovations, we presently have over 5 desalination technologies helping off-grid communities survive the ravaging freshwater undersupply.

Solar-powered reverse osmosis utilizes solar energy indirectly and it is one of the most effective and renowned saltwater desalination technologies. In reverse osmosis, solar energy is essentially used to power up integrated high-pressure pumps. It is a pressure-driven process that alienates dissolved salts from water using partially porous membranes.

Solar-powered distillation is a simple yet effective and efficient saline water desalination technology. It is also referred to as evaporative desalination and it separates dissolved salts from water in a manner likened to the typical rain formation process.

Evaporative desalination uses a solar-powered heating medium to boil saline water to the point of evaporation. The vaporized water is consequently driven into the condenser, where it is chilled to produce fresh liquid water. Solar-powered distillation can be achieved using either of the following technologies.

In multi-effect desalination, the evaporation of water is undertaken in cells with equilibrium temperatures ranging from 40 ° C to 68 ° C. The latent heat of vapor condensation is used to heat the subsequent cell thereby minimizing the use of solar energy.

In multi-stage flash distillation, saline water is heated up to a temperature of 120 ° C in the brine heater before being transferred into a second chamber (stage) with lower ambient pressure. The resulting vapor is subsequently chilled in a range of tubes running through the vessel. 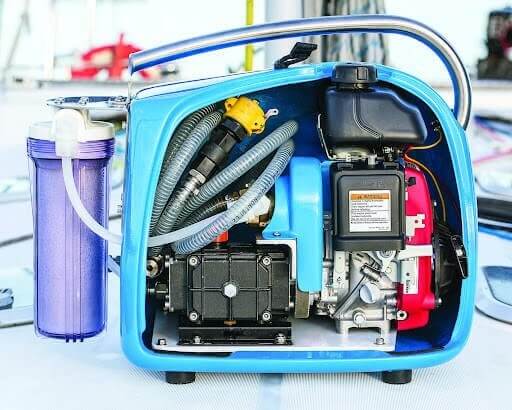 Why It Is Worth Having a Portable Solar Water Desalination Equipment.

However, with feasible water purification technologies such as desalination, mankind has the upper hand in fighting water scarcity. Here are some of the rewards one can bag by utilizing a portable solar water desalination unit.

• It Helps Conserve the Environment.

Solar-powered water makers are essentially powered by clean energy drawn from the sun. They do not utilize fossil fuels, which when burned produce carbon dioxide. CO2 is a greenhouse gas primarily responsible for global warming and adverse climate change.

• You Get an Uninterrupted Supply of High-Quality Potable Water.

The quality of freshwater generated is constantly high and has a maximum salt concentration of 1,000 ppm. This water is fit for human consumption as it meets the stringent threshold set by the WHO organization.

• You Can Easily Transport the Equipment.

Portable desalination systems are compactly designed, light in weight, and easy to transport. You can easily and cheaply move around the system or even share it with neighbors, friends, or relatives. In addition, the mobility of portable solar water desalination equipment makes them ideal for emergency response services.

Long gone are the days when desalination was viewed as an impractical solution to water scarcity due to high production costs. Modifications brought about by technological breakthroughs have tremendously shrunk the operational and maintenance costs of desalination equipment.

Typically, solar desalination devices are long-lasting systems with nonchalant maintenance demands. For instance, a portable solar-powered RO desalination system has an average lifespan of 15 years. However, if the system is rightfully utilized and serviced frequently, its lifespan can be extended to 20 years.

• Production of Brine as a By-Product.

Saltwater desalination machines generally produce two streams of water; the permeate stream and the brine stream. The brine stream consists of expunged salts and it is extremely concentrated and dangerous. If re-injected into the ocean or other waterbodies, brine possess a significant threat to marine life. However, the brine can be disposed of appropriately or treated sufficiently for reuse.

The power consumption rate of desalination systems has fallen greatly in recent years. However, there is no denying that desalination is still a power-intensive process. Multi-effect distillation and multi-stage flash distillation consume more power than reverse osmosis. However, with solar energy, this is not necessarily a major concern given that solar energy is freely harvested from the sun.

With the levels of global warming at an alarming level, the need for people to ditch fossil fuels for renewable energy sources has never been greater. Desalination, which is generally a power-intensive technology is slowly adopting the use of solar energy and the resulting rewards are pretty impressive.

Solar-powered desalination not only help solve the dire water scarcity crisis, but it also helps reduce carbon emissions. In the near future, it is projected that solar desalination will grow more popular as more breakthroughs in technologies are made. Contact NEWater for any information on solar desalination systems or order placement.