As each day passes, the water scarcity menace becomes more and more glaring with projections suggesting that around half of the human population will be living in water-deprived regions by 2025. According to UNICEF, roughly 2/3 of the existing human demographic (4 billion people) is subjected to adverse water shortage for approximately a month every year.

Attempts to fill the gap left by decreasing freshwater reservoirs are at present directed towards the treatment of contaminated water like seawater, groundwater, wastewater, and brackish water. Most forms of feed water harbor high concentrations of ionic pollutants, which technically makes the water hard and unfit for multiple domestic, commercial, and industrial applications.

In the last century, the general consumption of water has doubled the rate of population growth as reported by the United Nations. To meet the demands for high-quality potable water for industries and households, manufacturers have upped their development of water softener systems.

NEWater has particularly emerged as a leading manufacturer of deionization water systems and water softener systems in the past 2 decades. By manufacturing high-quality water softener units that are designed to generate deionized water affordably, NEWater is equipping industries, households, and businesses with the necessary tools to fight water scarcity. 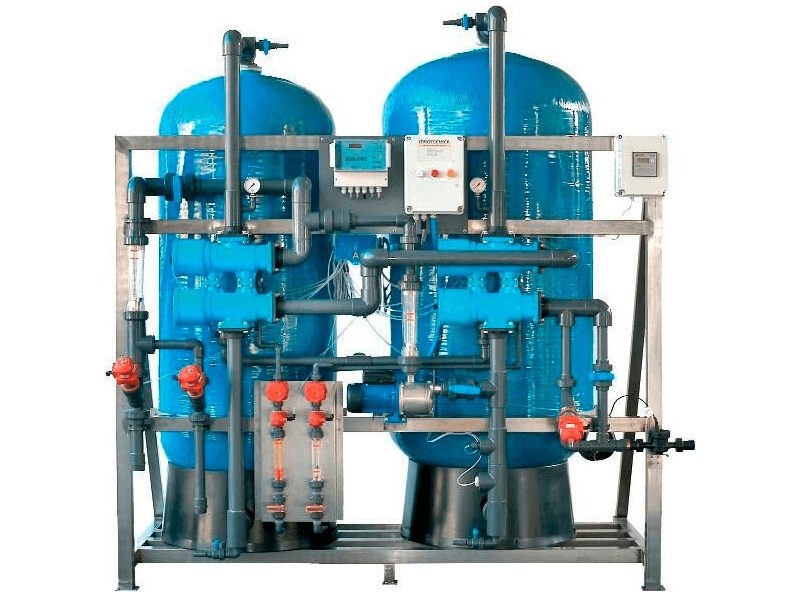 What are Deionized Water and Soft Water?

Deionized water is typically high-quality potable water with a low or non-existent concentration of ionic contaminants. Essentially, deionized water is generated via a process referred to as deionization, which eradicates minerals from raw water. Deionization further eliminates organics hence it is revered in industrial applications. Deionized water rarely has a nutritional value given most if not all of the suspended solids and minerals are ejected. Nonetheless, it might harbor certain odors or tastes.

Soft water on the other hand is potable water devoid of hardness minerals like calcium, magnesium, iron, and lime. Water softening prevents the accumulation of deposits on pipes, water heaters, and other water treatment equipment. It also results in the removal of certain tastes and odors. Water hardness is graded based on the concentration of hardness minerals per million. Underneath are the distinct classifications of water hardness.

How Does Deionization (DI) Work?

The Process of Ion Exchange.

The deployment of both cation and anion exchange resins facilitates base exchange and organic scavenging resulting in the production of high-grade product water devoid of all ionic contaminants. 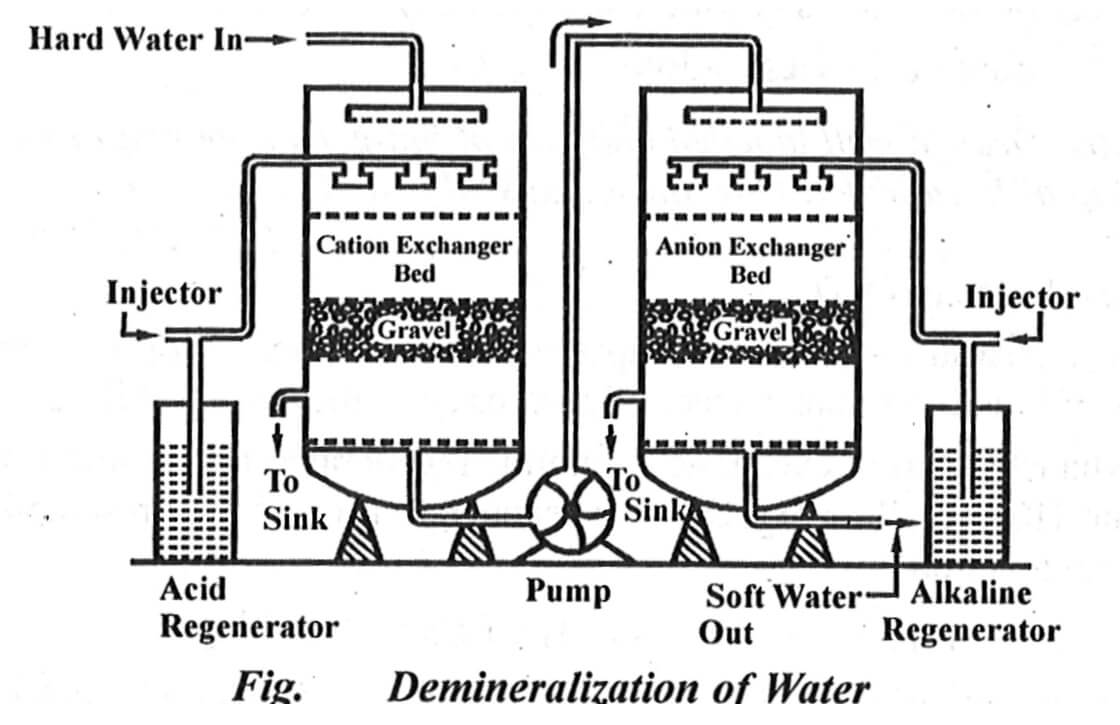 Subsequently, the water from the cationic vessel is then passed through the anion resins. Here, the hydroxide ions from the resins are released and swapped for the anionic pollutants in the water. 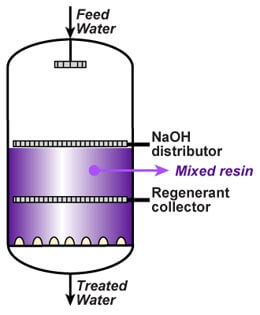 The Process of Electrodeionization.

Electrodeionization is a contemporary deionization technology that runs on DC energy rather than chemical ions. It has been touted by many as the ideal substitute for mixed-bed deionization due to its effectiveness and efficiency.

Electrodeionization gets rid of the ionic contaminants from raw water without necessarily replacing them with less objectionable minerals. It is gradually gaining prominence in industries and laboratories because it does not generate lethal wastewater. 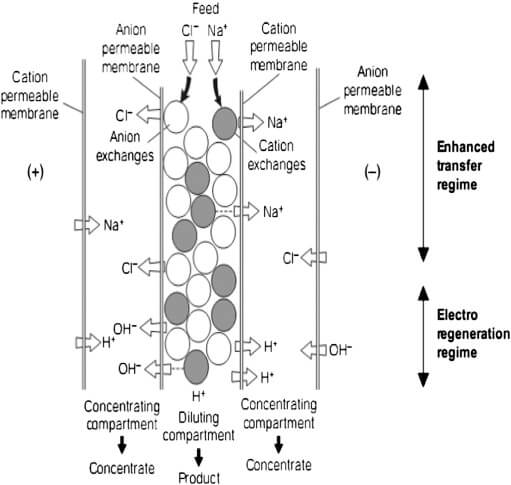 The Advantages of Deionized Water and Softened Water.

In complex industrial, pharmaceutical, or laboratory applications, the use of untreated raw water with high concentrations as an ingredient or cleaning agent can put the entire process in jeopardy. To mitigate contamination of essential products or services, deionization and water softener systems are deployed to supply first-rate softened water or deionized water.

In pharmaceutical manufacturing, deionized water is considered blanks because of its chemical composition, which permits its use as an impartial solvent. It harbors no impurities hence it does not risk contaminating the drugs or sensitive products it is used as an ingredient. The following are key advantages of using deionized water.

The Pros of Using NEWater’s Deionization and Water Softener Systems.

Equipped with unique and intelligent designs, NEWater’s deionization systems are guaranteed to offer your industry or business a cost-efficient solution to your water problem. Below, we expound on why you should procure your water softener systems and deionization equipment from NEWater. 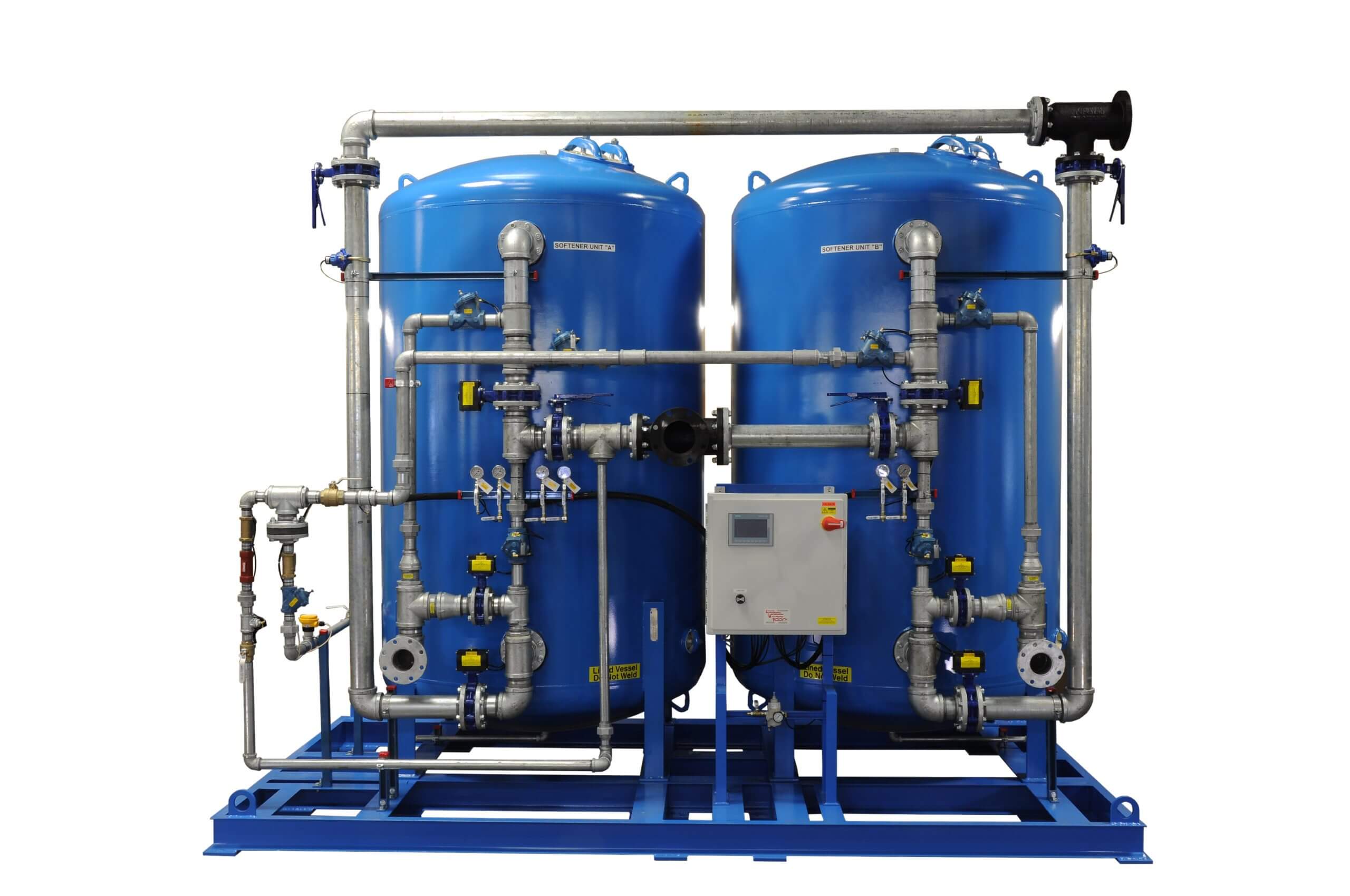 The installation of NEWater’s deionization and water softener skids is pretty easy given most of them are plug-and-play. For skid-mounted systems, which are available on order, we assemble all components on a metal frame thereby minimizing the costs of installation.

With measures such as automatic regeneration, our water softeners and deionizers are considerably uncomplicated to use. This is further enhanced by our detailed and easy-to-understand user manuals. Additionally, NEWater provides free installation manuals via remote video tutorials and our customer support team is always available for consultations.

No Highly Concentrated Wastewater from Electrodeionization.

In recent years, NEWater’s Electrodeionization systems have increased in demand due to their effectiveness and overall cost-efficiency. A key advantage of Electrodeionization systems is that they do not utilize chemicals or salts to replace the ionic contaminants in feed water. This eliminates the possibility of having highly volatile wastewater thereby saving you the need for wastewater treatment.

With NEWater’s water softener units and deionization plants, you do not have to worry about regeneration given we have our systems fitted with meters or timed clocks. Over time, the objectionable ions derived from the feed water overwhelm the cation and anion ion exchange resins. At this point, regeneration is necessitated to uphold the production standards of the ion exchange resins. 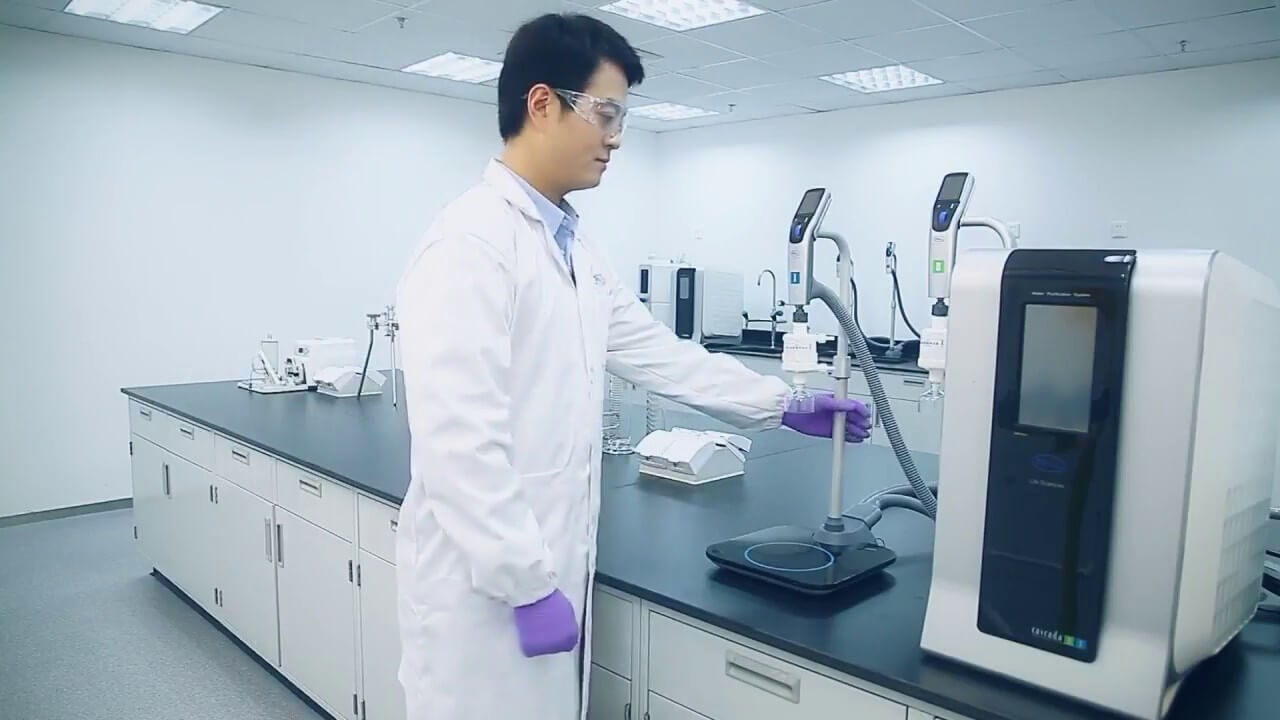 The manufacturing of pharmaceutical products such as drugs and water for injection necessitates high hygiene levels and the use of contaminants-free water. Deionization systems help pharmaceuticals to achieve the high-quality purified water necessitated for essential processes by eradicating up to 99.9% of ionic impurities found in tap water.

Deionized water can be polished using other water treatment processes like ultrafiltration, reverse osmosis, and ultraviolet radiation to meet the quality demands set by USP, JP, or Eur. Ph. The following are common uses of deionized water in pharmaceutical applications.

Various laboratories including hospitals, academic research, and industrial and agricultural laboratories mostly operate using highly purified water. The use of ordinary tap water in various laboratory experiments or activities could potentially alter the test results. Due to the sensitivity of biological, chemical, or agricultural tests, blank water such as deionized water is necessitated in laboratories. Common applications of deionized water in laboratories include cleaning apparatus, watering down concentrated solutions, and mixing various solutions.

To prolong the lifespan of boiler feedwater equipment, deionized or softened water is utilized because it is devoid of hardness minerals. The use of untreated raw water subjects your boiler feed to potential scaling and ultimately fouling. The use of deionized water in boiler feed has proven it can prolong the plant’s life service and avert premature damage.

The use of hard water in laundry results in excessive use of detergents as well as soiling, which essentially means your brightly colored clothes will have spots. To prevent all these, water intended for use in laundry applications is first softened using ion exchange, lime softening, reverse osmosis, distillation, and using chelating agents.

Other applications of deionized and softened water include: 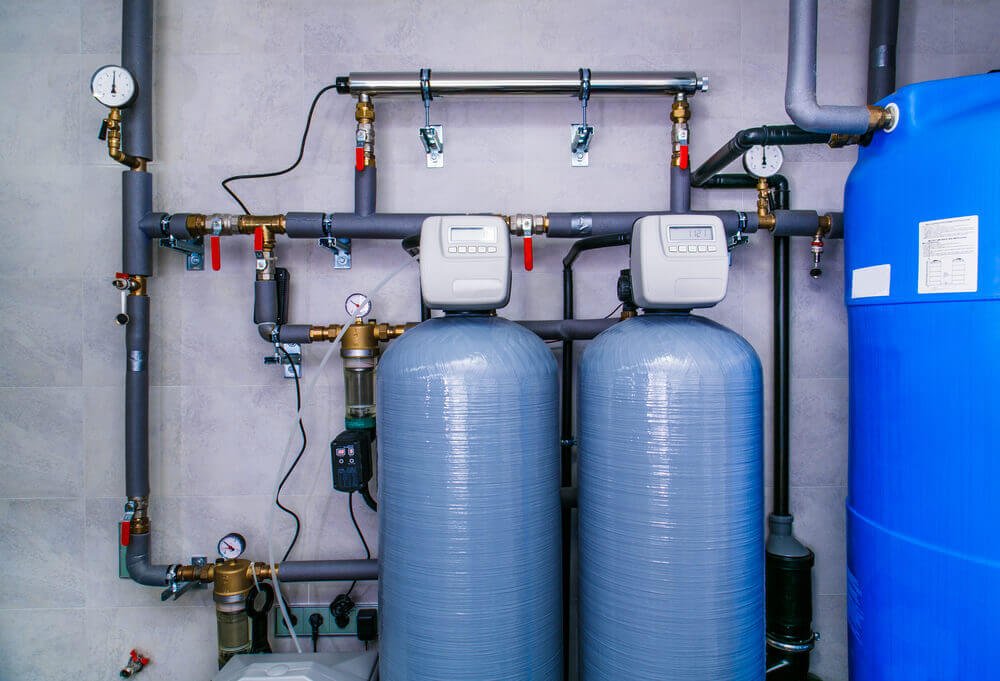 The Cost of Deionized Water and Soft Water.

The cost of producing deionized water varies significantly depending on the quality of feed water deionized and the deionization technology utilized. To establish the cumulative cost of generating deionized water, you need to factor in the following variables, installation, labor, power consumption, regeneration, and maintenance expenses.

To aid you to understand the operational costs of a deionized water system, we have broken down the operational considerations of a 14,000 GPD deionization plant. In this illustration, the overriding assumption is that the system runs continuously for 24 hours at a flow rate of approximately 10 GPM.

Most deionization systems necessitate a change of resins every once in 5 years. However, the period might be different for different water deionization systems depending on the frequency of use. A cation resin measuring 5 ft3 costs approximately $500 while an anion resin costs roughly $250 per ft3. Considering that the change is done once in 5 years, the total cost of resin replacement per month equals $38.

The prevalent power voltage of a region often influences the electricity bills of a water deionization system. If the system is using 460V power, the monthly expenditure on power is approximately $35. This is assuming that the power consumption is billed at a rate of $0.10 per kW/h. Cumulatively, the total cost of producing 1000 gallons of deionized water is approximately $2.8.

The Cost of Producing Softened Water.

Similarly, the cumulative cost of a water softener system can be classified into two broad categories. The purchasing price, which takes into consideration the buying price of the water softening equipment and the operational cost, factors in the installation, labor, power consumption, and maintenance expenses of the system.

There are varying water deionization systems manufactured with distinct specifications to generate different types of deionized water. Types of deionized or purified water vary from type II to type IV with the main difference being the conductivity, resistivity, and Total organic carbons (TOC).

This ensures all our customers have their unique demands for deionized water well catered for. In addition, they have varying service flow rates ranging from 2 GPM to 135GPM. The key features of two-bed deionizers are:

Mixed-bed deionization systems have both the cation and anion exchange resins housed in one pressure vessel. The anion and cation exchange resins are rigorously blended and this allows the substitution of both cationic and anionic pollutants with hydrogen and hydroxyl ions respectively. 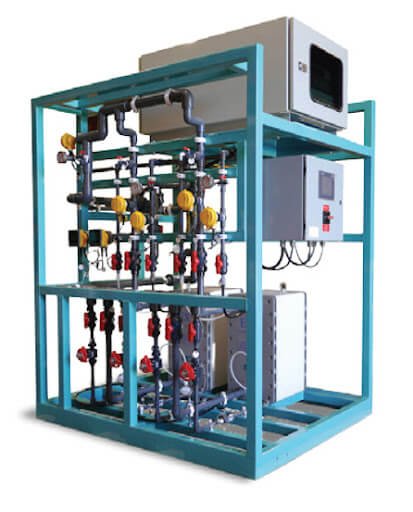 Electrodeionization（EDI）systems utilize DC power and active media to eject ionic pollutants from feed water. EDI water systems are greatly revered because they do not necessitate the use of chemicals to deionize water hence they do not generate waste. Principally, EDI devices are deployed to polish water produced by reverse osmosis systems or two-bed deionization systems.

To generate softened water, the hardness minerals (magnesium and calcium) are swapped with sodium or potassium. Over time, the ion exchange resins become overwhelmed with the objectionable ions thereby obliging regeneration. The water softener systems manufactured by NEWater are broadly categorized into industrial or commercial water softener systems.

Hard water is known for fouling valuable equipment and clogging pipes, boilers, and heat exchangers. As such, most industries utilize water softener skids to avert the scaling effects of hard water. 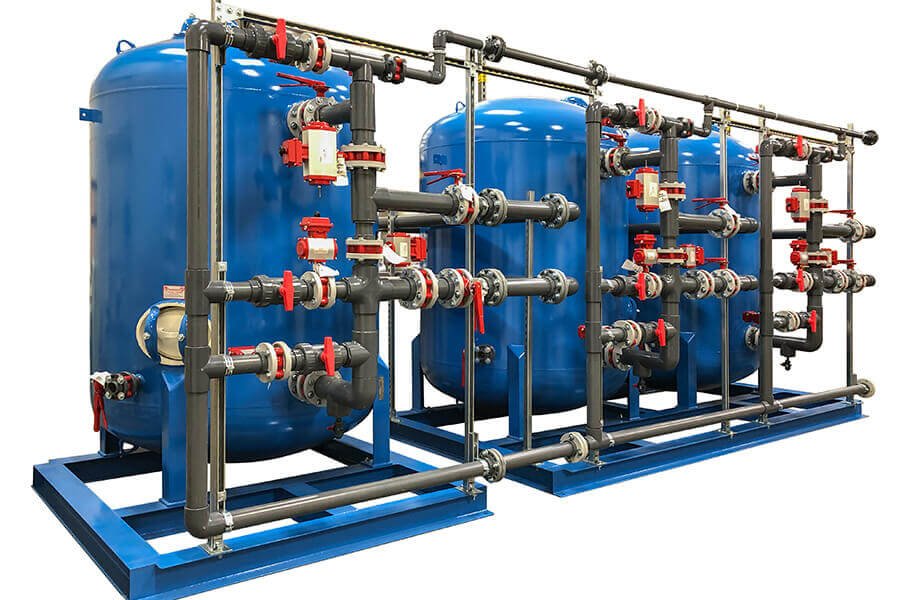 If you are interested in learning more about deionized water, softened water, and their respective systems, you can visit our webpage. For order placement or technical consultations with our engineers, do not hesitate to contact us via our email info@newater.com.