Over the years, the world has experienced alarming desertification rates. It is estimated that drought converts approximately 12 million hectares of land into deserts annually. With an annual population growth score of 1.1%, millions of households are subjected to adverse water shortages every year.

A widely sought-out remedy to the water shortage menace has been the treatment of seawater, brackish water, groundwater, and wastewater. Although water treatment processes and equipment have proven to be relatively expensive, continuous innovation gives hope for better, more efficient, and highly effective technologies.

Industries, municipalities, and persons in water-deprived regions bordering the sea have turned to seawater treatment as an alternative supply of freshwater. A key process utilized in seawater desalination is reverse osmosis due to its high salt rejection rates (up to 99.7%). This process was initially put into practice in the late 1940s and early 1950s.

NEWater’s mission is to bring new life to water and for the past 2 decades, we have spearheaded the production of comprehensive water treatment systems. Over 20 years, we have manufactured and supplied over 9000 water treatment systems and an extra 2000 customized units. Thanks to our systems, millions of people have unlimited access to high-grade potable water at reasonable rates.

Since its inception as a water treatment solution in 1946, reverse osmosis has revolutionized water treatment. Reverse osmosis is simply a membrane-based filtration process driven by pressure to lessen the magnitude of total dissolved solids in feed water. Additionally, the process eradicates microorganisms, colloids, organic chemicals, metals, bacteria, and viruses found in raw water.

The versatility, resourcefulness, and cost-efficiency of reverse osmosis facilitate its application in both small-scale and large-scale industries. It is largely revered as a desalination technology due to its high salt rejection rates and tolerance to high TDS levels. Typical reverse osmosis plants lessen the TDS concentrations of seawater from roughly 35,000ppm to 1000ppm or less, which is the universal threshold for freshwater. 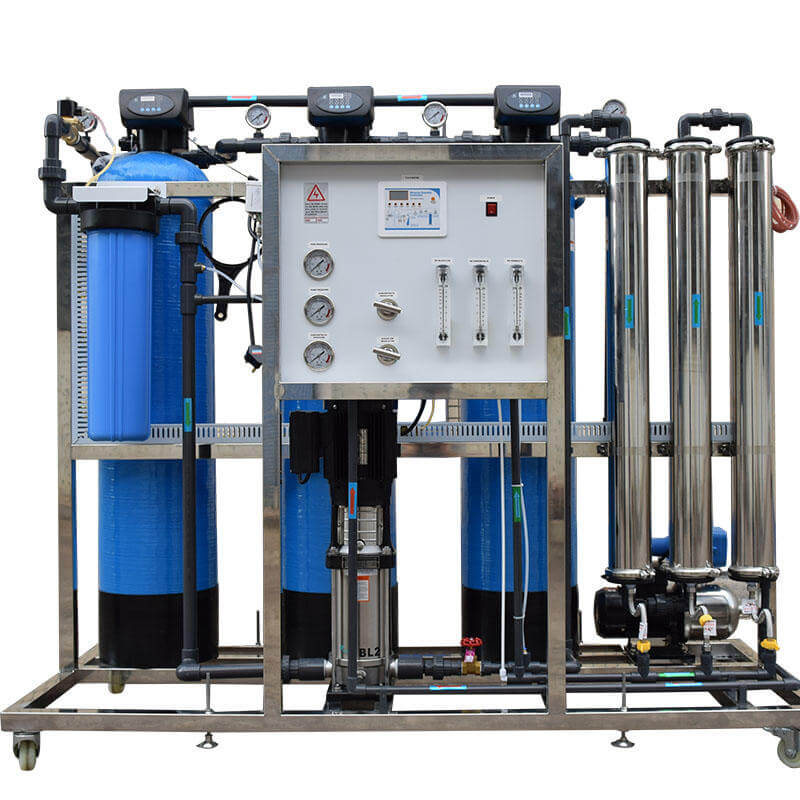 How Does Reverse Osmosis Work?

Reverse has for years been at the forefront of the fight against water scarcity. With reverse osmosis, idle natural resources like seawater and groundwater are converted into usable products. The working principle of reverse osmosis is founded on the exertion of foreign pressure to inverse the ordinary osmotic flow. This, in turn, forces the flow of water from highly concentrated streams to lowly concentrated streams.

The process of reverse osmosis commences once feed water is driven into a pretreatment unit. Here, sediment or carbon filters filter out colloids, debris, microplastics, and typically large contaminants. Depending on the feed water’s pH rating, chemical dosing is also deployed to weaken the corrosive and scaling effects of feed water on the RO equipment.

After pretreatment, the water is forced through the semi-permeable membranes to eliminate the dissolved pollutants. High pressure is applied to primarily reverse the natural osmotic flow. The reverse osmosis membranes have extremely small-sized perforations (0.0001 microns) which make certain most of the dissolved solids (rejection rate of 95-99.7%) do not pass through the membrane.

In the end, two streams of water are generated with one being fresh potable water (with a low TDS concentration) while the other stream is highly concentrated wastewater commonly referred to as brine.

The final stage in a reverse osmosis process involves post-treatment. This stage is mainly optional and is necessitated by the need for high-quality freshwater. Often, the freshwater generated may contain dissolved carbon dioxide since RO membranes are not effective in alienating it from water.

Additionally, post-treatment grants you the opportunity to remineralize your permeate. For drinking water, recommendations by the WHO suggest you add 30 mg/L and 10 mg/L of calcium and magnesium respectively. 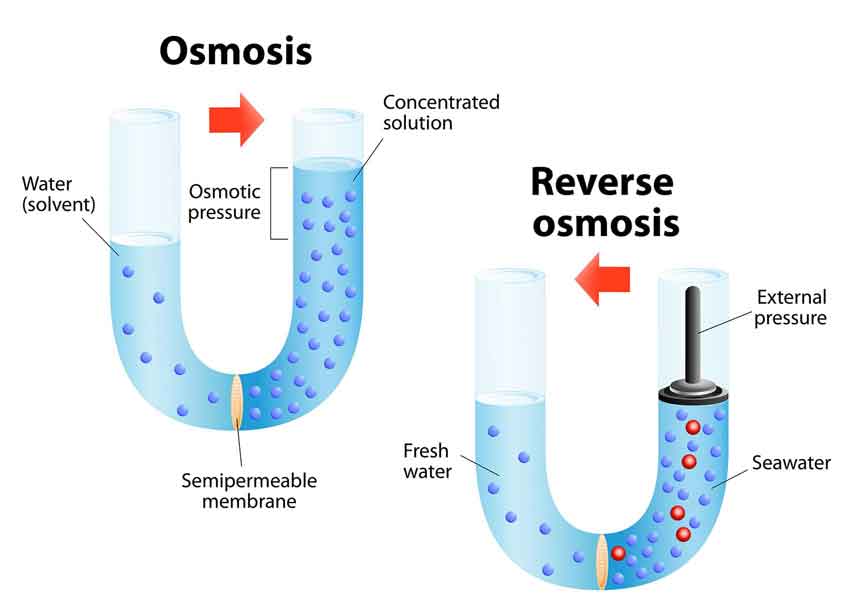 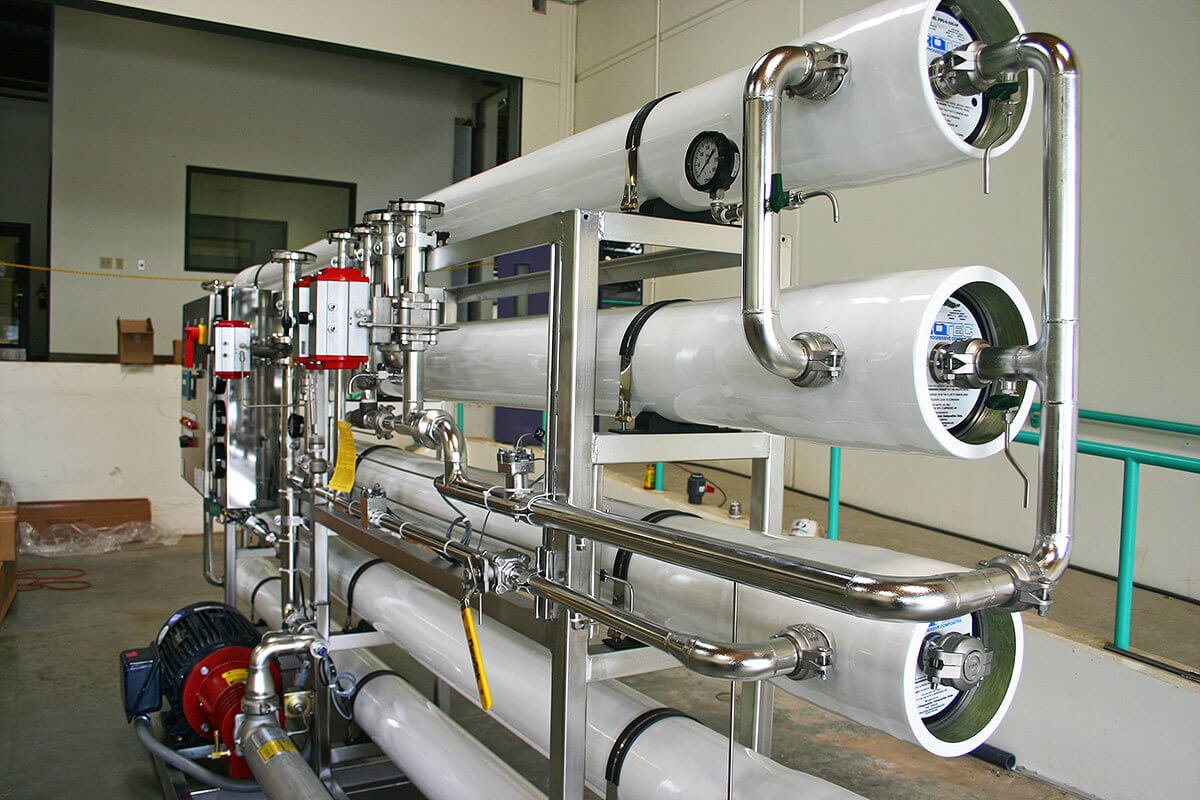 The reverse osmosis membranes are specifically designed to filter out dissolved salts from feed water. This is greatly enhanced by the use of 0.0001 micron-sized membrane perforations, which eliminate up to 99.7% of dissolved solids. To put this into perspective, desalting seawater with a TDS level of 45,000ppm using reverse osmosis will generate potable water with a TDS level of 1000ppm or lower.

NEWater uses advanced technology to manufacture high-quality reverse osmosis equipment that does not necessitate frequent repairs or replacements. The filters deployed in our RO pretreatment units are of superior quality and guaranteed at least 12 months of optimum services. Our RO membranes on the other hand guarantee a minimum of three years lifespan thereby saving users tons of money on replacements.

Moreover, relentless innovation in reverse osmosis technology has facilitated a decrease in power consumption from 16 kWh/m3 to roughly 3 kWh/m3 – 6 kWh/m3. Ultimately, contemporary reverse osmosis systems are quite affordable and relatively inexpensive to operate.

Our engineers design reverse osmosis systems based on the uniqueness of your water treatment project. Using the latest technology, NEWater manufactures unique reverse osmosis equipment specifically tailored to treat your feed water at your desired flow rate. We also tailor your system to produce high-quality potable water that meets your stipulated quality standards. 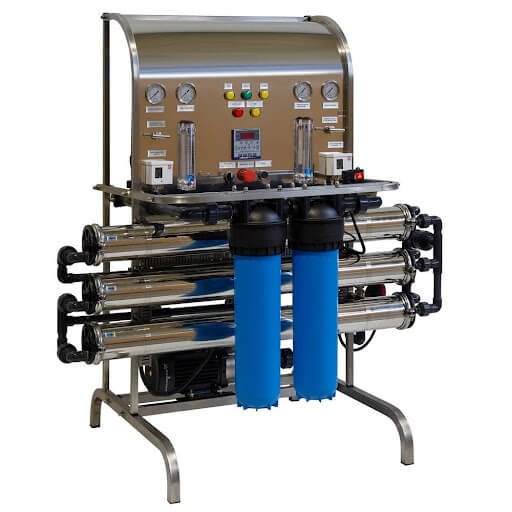 We equip our reverse osmosis systems with distinct capacities to accommodate diverse scales of application. The capacity of a reverse osmosis plant determines the number of freshwater gallons the system can treat in a day.

Gradual breakthroughs in reverse osmosis technology have provided industries in water-deprived regions with alternative and cost-efficient freshwater sources. Reverse osmosis systems are presently utilized as stand-alone systems or complementary systems for water treatment. Underneath, we explore the diverse sectors making use of reverse osmosis to supplement their freshwater reservoirs.

The impressive impurity rejection rates of reverse osmosis make certain that the potable water generated is free from potentially harmful contaminants. As a matter of fact, over 99.7% of the dissolved solids in raw water are eliminated by RO plants. The water generated by reverse osmosis averages a TDS rating of 300-500ppm, which is in line with the WHO guidelines on drinking water. 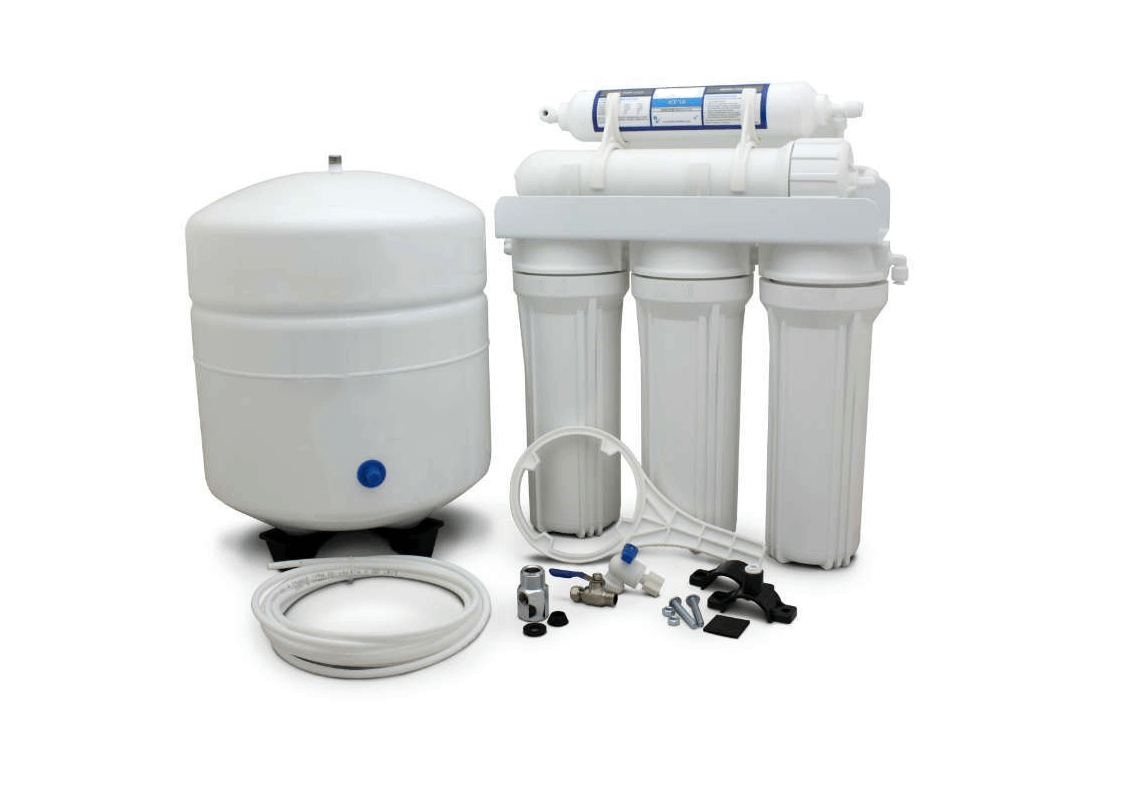 One of the adverse effects of water scarcity is often food shortage caused by poor crop production in drylands. Rain, river streams, and dams have been the predominant sources of water for agricultural applications but they are prone to depreciation. Reverse osmosis is currently the leading source of irrigation water in the Middle East and Northern Africa.

Additionally, water sourced from wells necessitates treatment to be viable for use in farming. In fact, 70% of the extracted groundwater is utilized in agricultural production thanks to reverse osmosis and other water treatment technologies.

The primary solvent used in most laboratories is water with applications ranging from basic cleaning of equipment to diluting key solutions for experiments. Reverse osmosis generates varying grades of potable water suitable for distinct laboratory applications.

Certain laboratory applications such as experimentation necessitate highly treated water given the contaminants in raw water could potentially contaminate the solution. Reverse osmosis is often deployed with other water treatment technologies like ultrafiltration and ultraviolet light to generate high-quality purified lab water.

The Cost of Reverse Osmosis.

Additionally, advancements in membrane technologies have fundamentally lowered the operational costs of reverse osmosis systems. For manufacturers like NEWater, this has been translated into affordable prices for local and global customers.

The actual buying price of reverse osmosis systems is provided upon request due to the complexities of different specifications. Different variables that influence the purchasing price of a reverse osmosis unit include the size, specifications such as maximum TDS levels, number of gallons produced in a day (capacity), and the design (skid-mounted, containerized, or bracket type).

Generally, expenditures on power consumption habitually account for over 50% of reverse osmosis systems’ operational costs. However, the innovation and use of highly resourceful energy recovery devices and high-pressure pumps have fundamentally lowered the amount of energy consumed to treat a cubic meter of feed water.

At present, reverse osmosis consumes between 3kwh/m3 to 6kWh/m3 of power, a significant drop from 16kWh/m3 in the 1970s. Factors that influence the power consumption of a reverse osmosis system include the concentration of the feed water and the production capacity. The power consumption cost of a 10,000ton/day seawater RO system is roughly 2.25 yuan per ton of water.

The operation of a reverse osmosis system especially at a larger scale necessitates one or several technicians. The wages of these technicians vary depending on the quality and quantity of services provided. Another key determinant of the labor fees is the labor laws and regulations of respective countries. For illustration, the labor charges of seawater RO systems in China are approximately 0.2 yuan/ton of water.

Certain consumables such as chemicals for pretreatment are mandatory in a reverse osmosis system. When broken down, the cost of these consumables is roughly 0.05 yuan per ton of water.

Moreover, there are maintenance costs related to repairs and replacements of filters and membranes. The average replacement cost of RO membranes is estimated to be 0.05 yuan per ton of water as well. The use of high-quality RO membranes by NEWater guarantees at least 3 years of service thereby lowering the operational cost.

Considering all the above-stated expenses, the overall cost of operating a seawater reverse osmosis system (with a daily capacity of 10,000 tons) in China is approximately 4.54 yuan/ton of water.

NEWater offers a wide array of commercial and industrial SWRO plants intelligently designed to desalinate over 99% of dissolved solids present in seawater. Our SWRO systems have extreme TDS tolerance levels (up to 45,000ppm) to facilitate optimum seawater desalination. 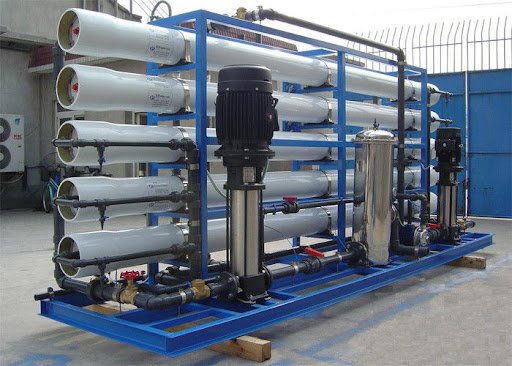 To combat water scarcity, over 50% of the global population has turned to well water. Seventy percent of the water generated from private wells is used to bolster the agricultural sector through irrigation. However, raw well water is hardly usable for domestic or irrigation applications prior to treatment.

This is chiefly because of high acidity and the presence of ionic pollutants such as magnesium and calcium. Reverse osmosis has massively aided efforts aimed at improving the quality of groundwater by eradicating water hardness, microorganisms, bacteria, viruses, and organic chemicals found in it.

A few years back, containerized reverse osmosis systems were touted to be the future of water treatment plants. This is because containerized systems occupy a smaller footprint, enhance mobility and provide turnkey solutions. Typical containers used to create NEWater’s containerized RO systems are the standard 10ft, 20ft, and 40ft containers. 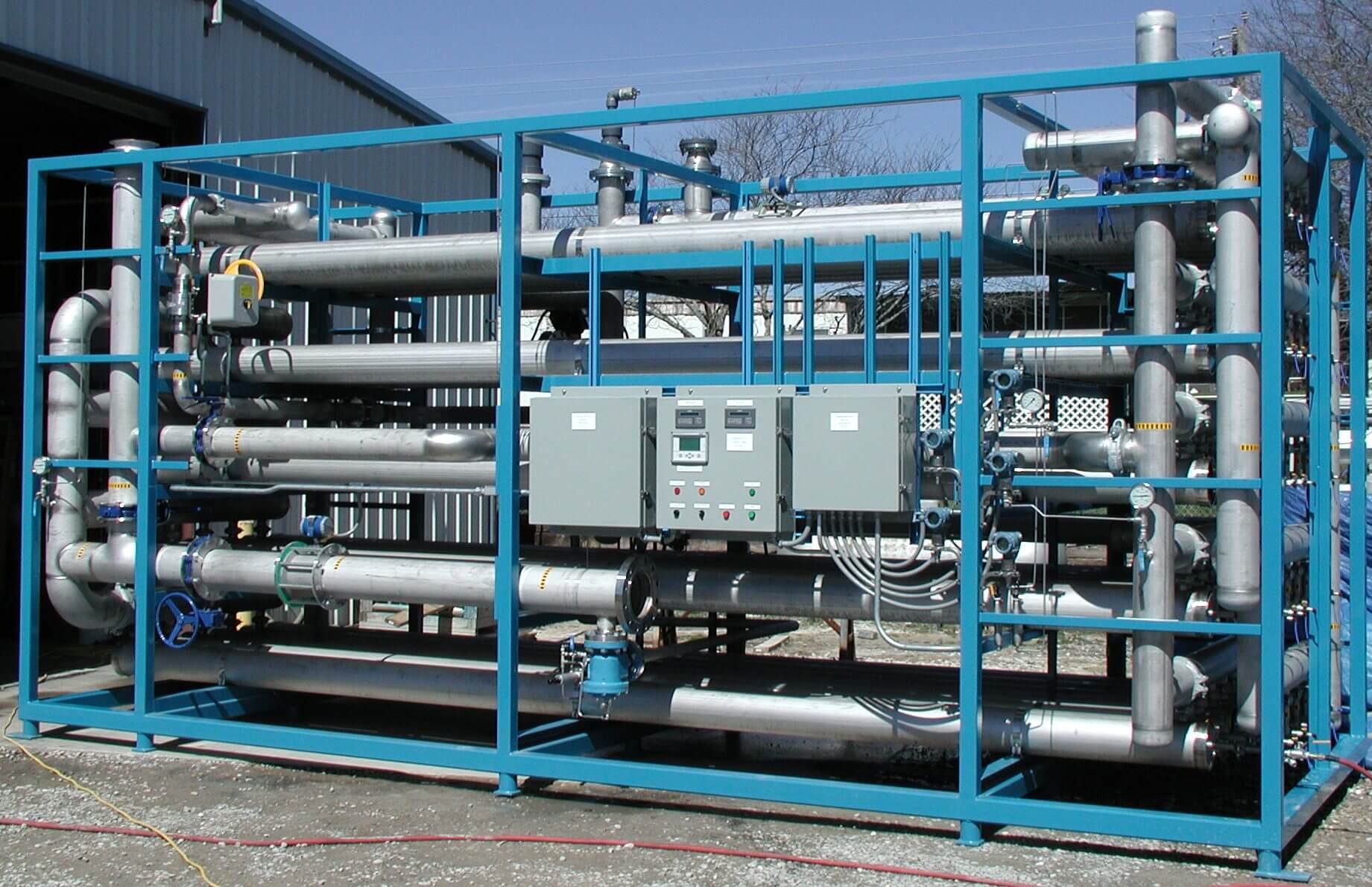 NEWater’s reverse osmosis systems page provides additional information resources on reverse osmosis technologies and systems. If you are interested in any of our systems, you are invited to contact our customer support team or engineers. Contact us now for customized water treatment systems at affordable price points. info@newater.com