Global water resources are in limited supply now due to economic growth and dwindling freshwater supplies. Around 75,000,000 people use seawater desalination worldwide, and this figure is anticipated to continue rising as population growth depletes freshwater supplies.

Simultaneously, millions of people are migrating to coastal towns with limited freshwater supplies. As a result, coastal nations, therefore, are increasingly focusing on seawater desalination as a means of addressing water scarcity. North Africa and the Middle East, for example, account for over half of global saltwater desalination capacity.

Seawater accounts for over half of the saltwater sources that impact human intake worldwide. In the United States, for example, just 7% of desalination plants utilized brine in 2005. Certain water sources that must be desalted are categorized as saltwater, others as river water, and wastewater.

It is for this reason, that NEWater Company, with over 20 years of technical research and experience in seawater desalination systems, among other water purification systems, seeks to provide a lasting solution to this problem.

This in return has placed us on top of the world map as leading manufacturers and suppliers of seawater desalination equipment. On the same note, we have built over 9,000 water technology system units for customers across the globe, where 2,000 of these are customized systems.

What is Seawater desalination:

Seawater desalination is the process of desalinating seawater to produce fresh water. It is an open-source incremental technique for utilizing water resources that may enhance the overall amount of fresh water and is unaffected by time, space, or climate.

All these seawater desalination technologies use various pretreatment, and posttreatment processes some of which include, microfiltration, ultrafiltration, and nanofiltration.

Distillation is the process of heating seawater, vaporizing it, and condensing the steam into fresh water. Seawater desalination technology using the distillation method is the first to be put into industrial use, and it’s characterized by its applicability even in seawater environments with severe pollution and high levels of biological activity, as well as the high purity of the water produced. However, the desalination process consumes a lot of energy, increasing the initial investment cost significantly. 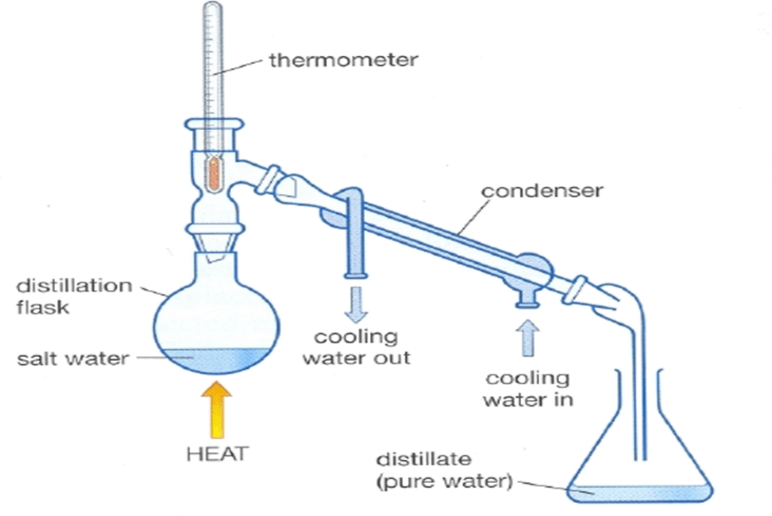 Additionally, reverse osmosis is the most used seawater desalinating technology today. It is also the fastest-developing seawater desalination technology and has a broad range of applications due to its low investment, low energy consumption, short construction period, and small land occupation. 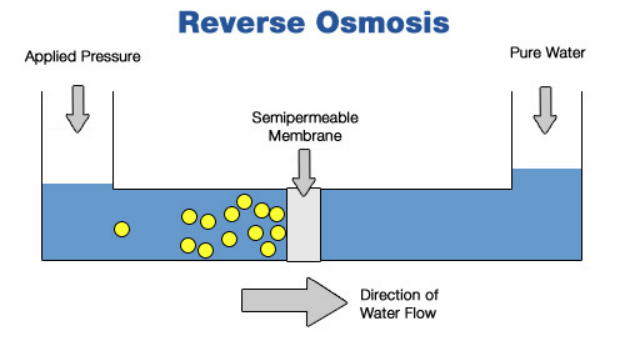 Distillation is a costly, complex, and energy-intensive process. In comparison, reverse osmosis membrane is more practical and cost-effective for seawater desalination.

Some of NEWater’s land seawater desalination equipment advantage points include: 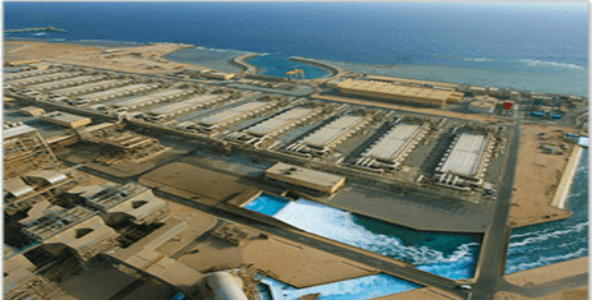 The only complete solution to the draught onboard problem is to provide domestic and drinking water on board. Every day, people need a lot of freshwaters, but transporting that much water takes up a lot of space, and the amount consumed stays the same every day. Therefore, with the help of marine desalination equipment, this problem can be resolved completely.

The marine seawater desalination machine has been specifically designed for use on fishing boats. It is compact in size, light in weight, easy to install, and highly adaptable, allowing it to be installed in cramped cabins, docks, aisles, and other spaces.

The advantages of the NEWater marine reverse-osmosis seawater desalination device include the following: a compact and simple structure that conserves cabin space; There is no requirement for a ship’s heat source, no phase change, no scaling problem, and no effect on the ship’s main engine’s operation status;

The structure is modular, and the design scheme adapts to the cabin’s various conditions; Additionally, marine seawater equipment is simple to operate and maintain. Freshwater can be produced immediately as long as there is seawater and electricity (220-380-415V/50Hz/60Hz). The equipment has a high desalting rate, stable performance, safety, and reliability, a novel, and ingenious design avoids frequent cleaning and emits no pollution into the environment.

As direct drinking water, it must be safe for human consumption and free of odors. NEWater marine desalination equipment is filtered by activated carbon and sterilized by ultraviolet rays after reverse osmosis filtration, resulting in high-quality direct drinking water.

The resulting water, which is now free of additives meets the national drinking water quality standard (GB5749-85) and is safe for consumption.

On-board seawater desalination is simple and reliable, and the water yield is guaranteed. 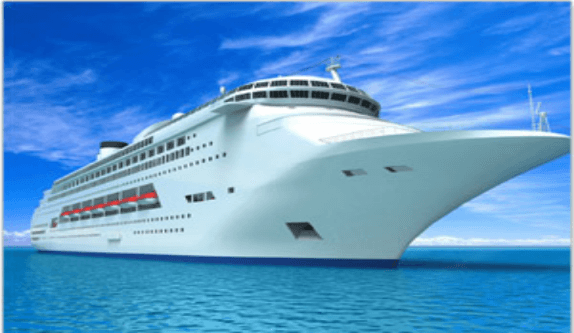 In light of the scarcity of fresh water and the inability of the urban tap water pipe network to reach coastal areas and islands, it is possible to desalinate seawater using seawater desalination equipment, solving the problem of residents’ drinking and production water.

NEWater reverse osmosis system combines renewable energy such as wind energy, solar energy, and wave energy with seawater desalination process to offer a lasting solution to the problem of water shortage in islands.

Coagulation filtration reduces turbidity by removing colloid and suspended impurities from seawater. In reverse osmosis membrane separation engineering, the fouling index (FI) is usually used to measure, and the FI value of feed water entering reverse osmosis equipment must be less than 4.

Because of the high specific gravity of seawater, the high pH value, and the large seasonal variation in water temperature, FeCl3 is chosen as the coagulant in the system, which has the advantages of no temperature influence, a large and firm alum flower, and a fast-settling speed.

Removal of organic matter and odor in seawater

The surrounding environment has a considerable effect on the seawater surrounding the island, with the chemical oxygen demand (COD) of seawater ranging between 1.7 and 2.5 mg/L, particularly during the summer and autumn, when the seawater has a strong odor and a peculiar odor.

The high-pressure pump and energy recovery device are protected from damage by the security filtration system’s use of a 316L filter and 5μm filter element, which filters seawater before it enters the pump and blocks particulate impurities with a diameter larger than 5μm in the seawater.

The energy recovery devices and the high-pressure pump are critical pieces of equipment for reverse osmosis seawater desalination because they provide energy conversion and energy savings. 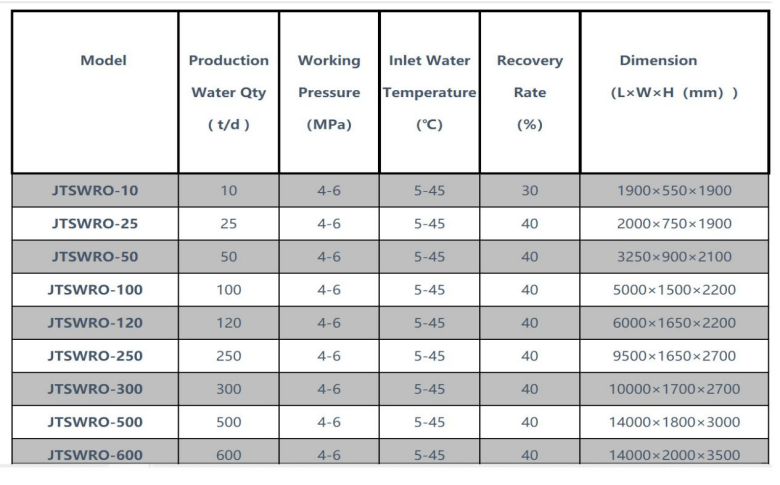 NEWater reverse osmosis seawater desalination systems are not only lauded across the world because of our highly rated expertise, but also for these various tangible benefits: 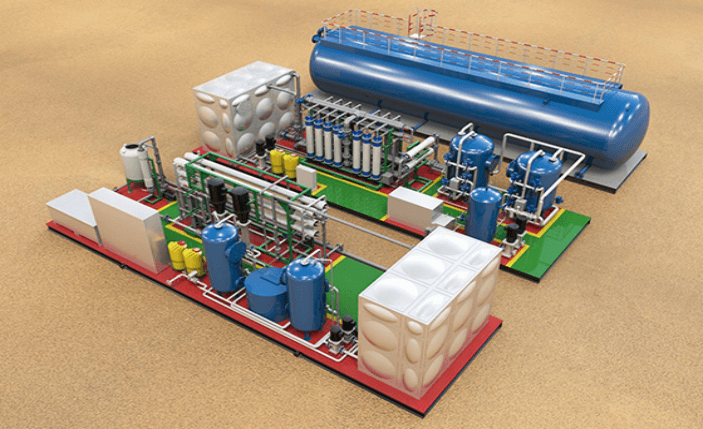 If you’d like to learn more about desalination or need technical assistance, please don’t hesitate to contact us. If you’re looking for cost-effective design solutions, our professional design team is here to help you!