Presently, there are over 22,000 seawater desalination systems spread out across the globe with the Middle East and Northern Africa accounting for approximately 50% of the plants. The demographics in coastal cities are continually on the rise with some coastal regions in Australia, the Middle East, and Southern California exhibiting population concentrations of over 75%. 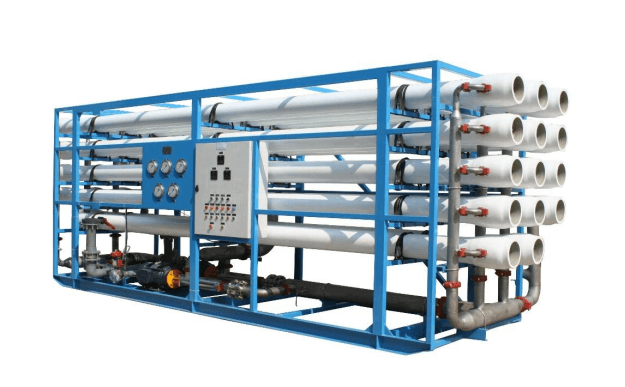 NEWater manufactures comprehensive seawater desalination systems custom-built to continually desalinate seawater for both onshore and offshore industries. The demand for clean product water in industrial applications is astronomical and the deterioration in freshwater reservoirs has most industries coveting alternative sources. 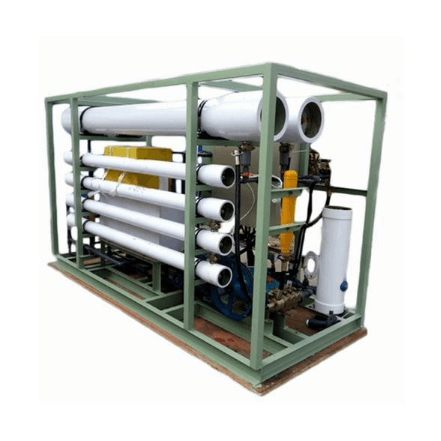 The effects of global freshwater scarcity have been detrimental to most commercial enterprises. Consequently, seawater desalination has emerged as a dependable remedy for most coastal and arid-based businesses.

NEWater’s commercial desalination plants are available in standard capacities ranging from 350 to 15,000 gallons per day. This provides small, medium, and large businesses with a consistent supply of fresh water at all times. Capacity demands not accommodated by our standard systems are custom-built by our proficient engineers.

They have high desalination rates often lowering TDS levels to approximately 500mg/L from over 35,000 ppm. We assemble the systems at our facilities before subjecting them to rigorous testing for quality assurance. 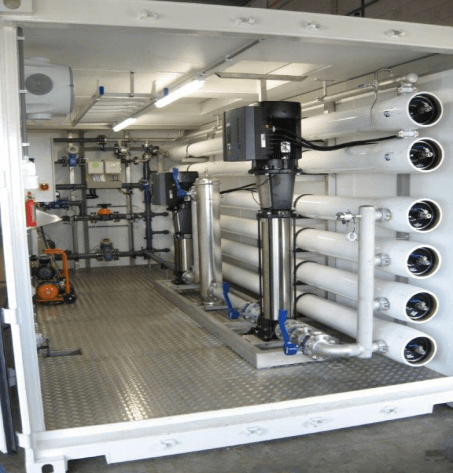 Reverse osmosis accounts for over 50% of the global desalination usage owing to its cost-efficiency and satisfactory salt rejection rates of up to 99.7%. The process is chiefly principled upon the use of pressure to distort the natural osmotic flow.

Consequently, high-pressure pumps are deployed to force the pre-treated seawater via perforated membranes. The 0.0001 micron-sized perforations of the semi-permeable membrane block the passage of dissolved salts, microorganisms, chemicals, and other unwanted constituents. The water collected is often fresh and with appropriate post-treatment, can be used for a number of applications. 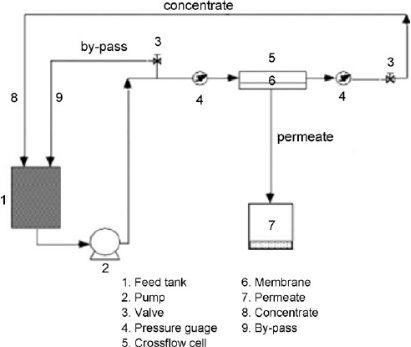 On the contrary, thermal distillation processes have their foundation rooted in the deployment of heat to alienate fresh water from seawater by evaporation. Undesired constituents with higher boiling points are left behind as the freshwater turns into vapor. Subsequently, the vapor is condensed and fresh product water is derived. Thermal distillation/desalination is broadly classified into:

Vapor compression derives the required heat energy used to evaporate the seawater from vapor compression. Principally, vapor compression uses either mechanical compressors or steam jets to generate heat by condensing the vapor. Ideally, VC seawater desalination systems are perfect for small applications given that their daily production capacity is roughly 3000 m3. They commonly operate at temperatures lower than 70°C hence it is unlikely to experience scaling and corrosion of equipment.

Multi-stage flash distillation is undoubtedly the most commonly used thermal desalination technology with a whopping 36% global usage rate. Desalination of seawater using MSF involves different stages, which in some systems range from fifteen to twenty-five. The heating of the seawater commences at high pressure and as the water passes through the subsequent stages, the pressure is proportionately lowered. Each MSF stage has a heat exchanger tubing, which condenses the steam consequently resulting in the collection of fresh potable water.

MED is renowned for its appeal to large-scale seawater desalination enabled by its enormous capacity ranges, high salt rejection rates, and energy efficiency. The use of multi-effect distillation dates back to the 1950s and this technique functions by evaporating water at varying temperatures and pressure levels. The vapor from subsequent effects is utilized to heat water from the next effect thereby optimizing power usage.

For protection and optimal longevity, components of RO desalination plants are fitted onto non-corrosive metal frames (mainly powder-coated stainless steel). The steel frames can withstand the powerful vibrations of the high-pressure feedwater pumps hence prolonging the longevity of your system.

Seawater is synonymous with seaweed, debris, and other large-sized constituents that may potentially harm the membranes. To avert premature damaging of the membranes, seawater RO desalination systems are fitted with filters that eradicate the large particles. Typically, the cartridge filters are polypropylene filters measuring five microns. 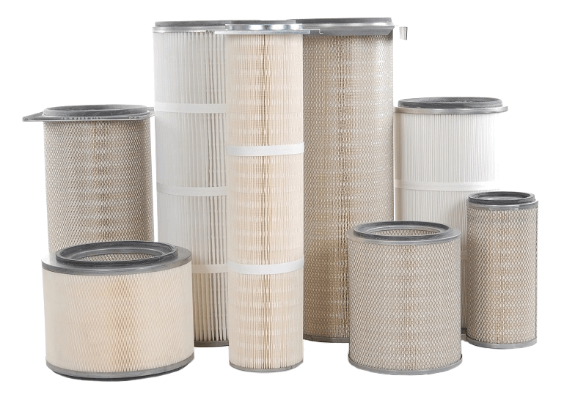 Seawater RO membranes are made of specialized proteins to facilitate the maximum rejection of dissolved salts and other constituents. The dimension and quantity of RO membranes deployed in a seawater desalination plant depend on the desired potable water quality and the system’s capacity.

Additionally, different applications may demand the addition of other supplementary components such as the pre-treatment chamber, membrane-cleaning components, chemical dosing system, and a post-treatment unit. 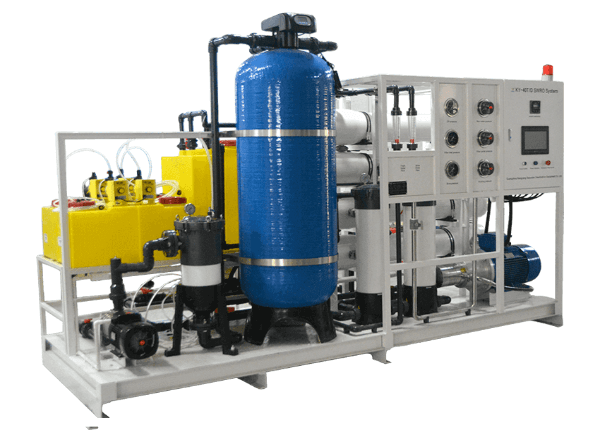 The drop-off in energy consumption since the 1970s has been immense. Reverse osmosis seawater desalination currently consumes approximately 3 kWh/m3 to 7 kWh/m3 of power while a few years back, the consumption was roughly 16 kWh/m3. Energy consumption in seawater distillation processes is as follows:

The ideal seawater desalination system has a capacity perfectly befitting your intended application. NEWater manufactures systems with varying capacities to suit diverse scales of application in homes, industries, and commercial entities. Our industrial seawater desalination systems operating on reverse osmosis are available in standard capacities ranging from 8000 GPD to 660,000 GPD.

On the other hand, we have commercial seawater RO desalination units with standard capacities ranging from 380GPD to 15,000 GPD. From our vast line of standard seawater desalination devices, you have the liberty to select a system that has a capacity range in line with your production objectives. Additionally, our engineers build customized desalination systems with personalized capacities and production rates. 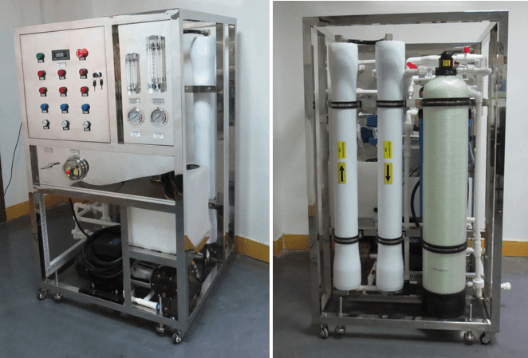 Principally, a seawater desalination system is only as good as the contaminants it eradicates. Different projects demand different grades of desalinated water and different systems have different salt rejection rates. Reverse osmosis is highly effective in eradicating dissolved salts from seawater with a maximum desalination rate of 99.7%.

Seawater from different seas or oceans exhibits different impurity concentrations and compositions (often measured as total dissolved solids TDS). The average TDS level of typical seawater is approximately 35,000ppm. A good seawater desalination system shrinks the TDS level to below 1000ppm, which is the bare minimum for fresh potable water.

Power options in different regions are subject to change. Primarily, seawater desalination systems are available in the following power options 220-380-415V/50Hz/60Hz. For compatibility, it is paramount that you first establish your region’s primary electricity frequency and voltage. Based on the information provided by the client, NEWater’s engineers manufacture customized seawater desalination equipment with the stipulated power options.

The use of cost-efficient technology and components by NEWater results in the availability of high-quality seawater desalination equipment. To reap the benefits of our premium, cost-efficient desalination solutions, get in touch with our technicians for a customized system. 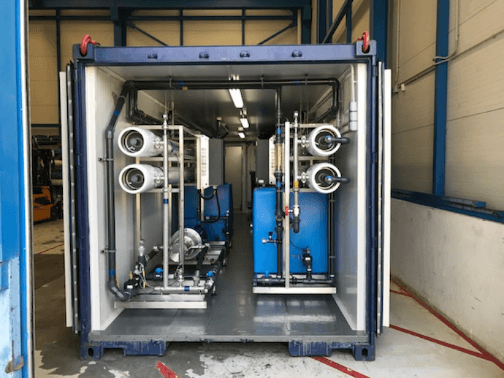 The principal benefit associated with seawater desalination systems is the provision of an alternative source of fresh potable water. In an era where freshwater reservoirs are depleting alarmingly, aridification is on the rise and population growth in coastal cities is proliferating, seawater desalination is at the very least revolutionary.

For an in-depth understanding of seawater desalination, related systems, and technology, do not hesitate to contact our specialist. We offer 24/7 customer support and our desalination solutions are tailored to provide convenience, efficiency in operational costs, and optimum effectiveness.